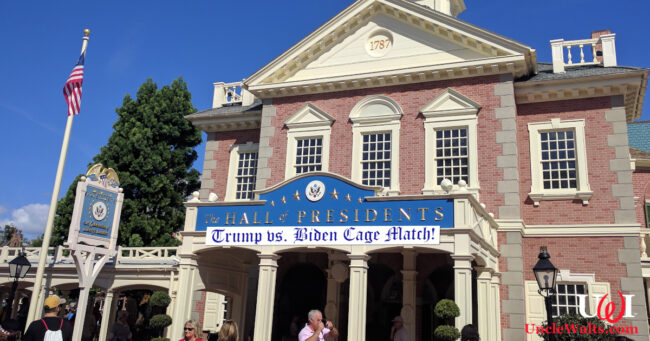 Perhaps this is how it should have been settled all along.

WALT DISNEY WORLD, FL — The Magic Kingdom’s Hall of Presidents is in limbo. With the Hamilton Live: Featuring the Muppets! makeover on hold due to budgetary issues, and America’s future on hold due to political wrangling, Disney Imagineers have been debating what to do with the presidential attraction.

“At this point we’re usually are preparing a new presidential animatronic,” said Disney (the company) spokesperson Jun Disney (no relation). “In fact, we already have a Biden animatronic ready to go, since the polls were so overwhelmingly accurate. Like in 2016, with the, um, … Hillary animatronic.”

So apparently Disney (the company) will split the difference and put both figures in.

“The idea came to one of our Imagineers, who accidently flipped past MSNBC on his television and immediately suffered an aneurysm,” Disney (no relation) relates. “His speech was a bit slurred as we rushed him to the hospital, but we think he was mumbling ‘cage fight.’ So we just ran with the idea.

“You know, now that I think back, he may have been trying to say, ‘Call my wife.”

November 11, 2020 by Marty in Florida
© 2020 Uncle Walt's Insider. All rights reserved. All images used with permission. Unless otherwise attributed, all images licensed under Creative Commons CC0 license. This site is protected by reCAPTCHA and the Google Privacy Policy and Terms of Service apply.