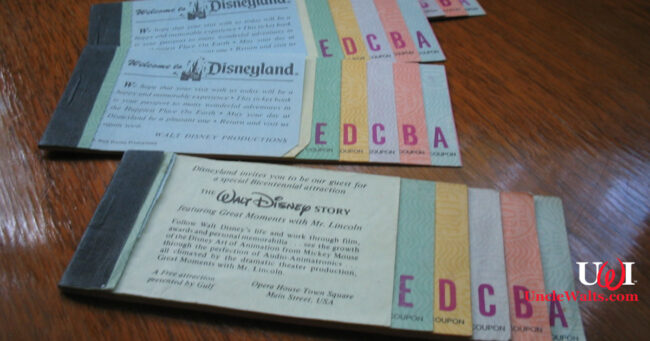 Because everything old is new again… if it brings in $$.

BR’ER BANK, CA — In his quest to find a way to charge guests extra for dang near everything, Disney CEO Bob “Bob” Chapek announced today that Disney ride coupon books are returning.

For the 98% of Disney fans alive today who have never seen one, a coupon book was an additional purchase above and beyond park admission. The booklet would contain various numbers of tickets with letters, and guests would need to exchange a ticket to ride the attractions. The higher the letter, the more popular the attraction: A-tickets were good for a ride on Main Street Vehicles or the carousel, for example, while E-ticket attractions included the Haunted Mansion, Pirates of the Caribbean, and Walt Disney’s private bathroom.

As part of the Walt Disney World 50th anniversary celebration, Chapek announced, guests will be required to purchase the booklets to be able to ride any attractions.

“Hey, don’t complain,” Chapek told Uncle Walt’s Insider. “Your park admission still gets you into the park.” Chapek then rubbed his hands together and cackled evilly. “For now, at least. For now.”

Do you need a coupon to buy a coupon book, we wonder? Comment below!

October 17, 2021 by Marty in California, Florida
© 2020 Uncle Walt's Insider. All rights reserved. All images used with permission. Unless otherwise attributed, all images licensed under Creative Commons CC0 license. This site is protected by reCAPTCHA and the Google Privacy Policy and Terms of Service apply.