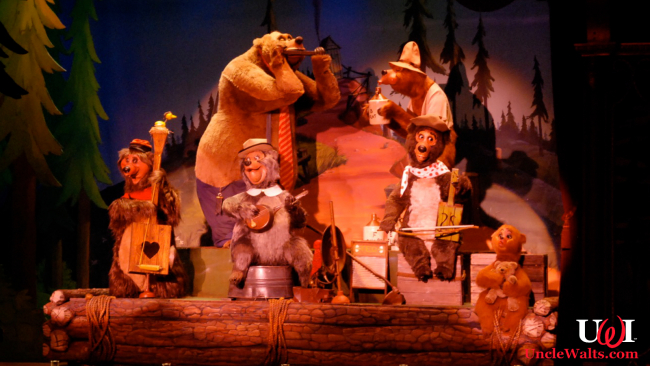 A Country-singing bear? Who ever heard of that?

BAY LAKE, FL — The Country Bear Jamboree has always had catchy tunes, but soon the popular attraction at Disney’s Magic Kingdom will receive a new audio system and a brand new soundtrack — and we’ve learned that the entire soundtrack will consist of (*drumroll*) earworms!

Uncle Walt’s Insider brings you a bear-y [Ed.: Isn’t it a little early in the article for puns?] exclusive first look at the changes in store.

What, exactly, is an earworm?

An earworm, according to musical experts, is a song with an ability to stick inside your brain, on repeat, long after you’ve heard them. Earworms are (often) easy to dance to, and have a simple musical structure with a rhythmic pattern. And most importantly, they are catchy. Oh so very catchy.

We asked Disney (the company) spokesperson Jun Disney (no relation) why they would change the Country Bear Jamboree to feature all earworms.

Disney (no relation) responded, “We received a lot of feedback from our guests when we closed the Hedwig and the Angry Inchworm ride at California Adventure. [Ed.: Pretty sure she means Heimlich’s Chew Chew Train, and he’s a caterpillar.] We never realized how much our guests loved worm rides. [Ed.: Again, caterpillar.] Because we need to put more Guardians of the Galaxy rides at California Adventure, there’s no more room there, so we thought we’d bring some worms to Florida. And we figured that earworms were the best kind of worms. The Country Bear Jamboree is an immensely popular ride, but with the new soundtrack, it’ll be even better.

“The Imagineers sat around for a few days, listening to everything on my iPod. They found what they think are the most earwormy songs ever. Turns out, we already own the rights to a lot of them, so it’ll be pretty affordable to make this change.”

Disney (no relation) continues. “I’m sure you’ll recognize most of the songs. The Bear Band bears will still play in the good old key of G. But in addition to that song, we’ll be adding several new songs.

“They’ll go into ‘Bear Necessities’, from the Jungle Book. They’ll also sing ‘Let It Go’, from Frozen, ‘You’ll be Back‘ from Hamilton, and ‘Under the Sea‘ from the Little Mermaid. Finally, we’ll stay on the water theme with something really exciting. Disney, the company, not me, just bought the theme park rights for ‘Baby Shark‘. Yes, you heard that right. The Country Bear Jamboree will be the first ever theme park version of this insanely earwormy song.

“Oh, and because every theme park attraction should have a Sherman Brothers song, we’ll wrap it all up with ‘Step in Time‘, from Mary Poppins.” [Ed.: For those who don’t know, Richard and Robert Sherman are some of the most prolific composers to ever work for Disney. In addition to the entire score of the Original Mary Poppins, they also wrote other classic earworms, such as ‘There’s a Great Big Beautiful Tomorrow’, and ‘it’s a lower-case world.’]

Disney has not yet released word on when these changes will be made.

Do you have songs stuck in your head now? What can we say, except you’re welcome. Comment below!

SPECIAL THANKS to Benny Fine of FBE. Your video came up on my news feed and totally inspired this article. And according to former Safari drivers, you were a pretty good manager too.

February 25, 2019 by X in Florida
© 2020 Uncle Walt's Insider. All rights reserved. All images used with permission. Unless otherwise attributed, all images licensed under Creative Commons CC0 license. This site is protected by reCAPTCHA and the Google Privacy Policy and Terms of Service apply.