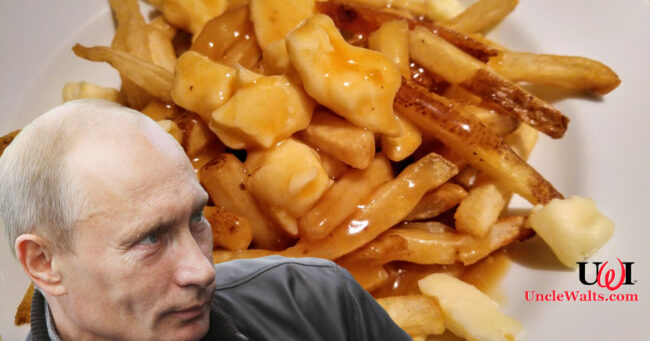 A dish named for its inventor, Vladimir Poutine.

WALT DISNEY WORLD, FL — Epcot Centre’s Canada Pavilion has been in the news several times recently (here, here & here), and not always for positive reasons. Today, however, in a move certain to impact Russia almost as much as the banning of its cats from international competition, the Pavilion is taking action to protest the invasion of Ukraine.

Poutine is a staple Canadian dish with made with french fries, gravy, and cheese curds, and traditionally eaten while riding a moose.†citation needed Disney (the company) spokesperson Jun Disney (no relation) explained the move.

“We were receiving a lot of complaints about the dish after the Ukraine invasion began,” Disney (no relation) told Uncle Walt’s Insider. “Apparently a lot of people just assumed that ‘poutine’ is the French-Canadian spelling of ‘Putin.’ It’s not.

“But it is pronounced the same way, so we thought stopping sales might be a bold and brave way for us to show solidarity with the people of Ukraine, and to also distract from the news that our CEO is publicly opposing parental involvement in teaching sexual topics to kindergartners.”

Disney (no relation) concluded, “We’re thinking of still selling the dish, but maybe calling it ‘Freedom Slop’? That name’s just a work in progress, though.”

Would you eat something invented by Vladimir Poutine? Let us know in the comments below!

Cover photo: Next: a “Poutine on the Ritz” meme. Photo by Camelia.boban [CC BY-SA 4.0] via Wikimedia.

March 12, 2022 by Marty in Florida
© 2020 Uncle Walt's Insider. All rights reserved. All images used with permission. Unless otherwise attributed, all images licensed under Creative Commons CC0 license. This site is protected by reCAPTCHA and the Google Privacy Policy and Terms of Service apply.