New “all CGI” Soarin’ Around the Solar System coming 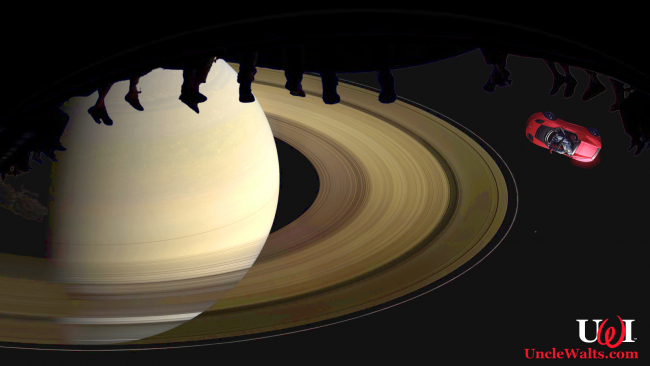 It’s the next step in a natural progression.

GLENDALE, CA — Thanks to leaks from within Disney Imagineering headquarters, we now know what the next Soarin’ destination will be: the Solar System!

In 2016, the ride debuted a new film featuring fly-bys of scenery across the globe, and the ride was renamed Soarin’ Around the Worl’. This new film came loaded with CGI “enhancements,” such as a whale breaching, the landscape of Monument Valley (which does not actually exist; it was created by Hollywood backdrop artists for Western films), and Michael Eisner pointing a spotlight at you from the top of the Eiffel Tower.

It is only natural, then, that the leaked third film would continue the move to bigger locations and more CGI. Our favorite Disney (the company) spokesperson Jun Disney (no relation) confirmed the coming update.

“The visuals they’ve dreamed up are spectacular,” Disney (no relation). “Skimming the atmosphere of Venus, watching a Russian satellite explode, seeing Starman fly through the rings of Saturn, that broken Wall-E unit we lost during the movie shoot, having three asteroids in the asteroid belt come together to form a Hidden Mickey…. And then the finale, when they reach Pluto, they’ll see… Pluto!

“There’s also one Imagineer who keeps suggesting we add ‘a close-up of Uranus.’ We try to ignore him.”

Disney (no relation) continues: “The best part is that we don’t have to actually produce any of it, because the screen will go black twenty seconds into the production. I mean, you’re hang-gliding in space, right? So you’d lose consciousness from lack of oxygen. We want to make the simulation realistic.”

No release date for the new Soarin’ has been announced.

How long will the film last if you hold your breath, we wonder? Comment below!

March 6, 2019 by Marty in California, Florida
© 2020 Uncle Walt's Insider. All rights reserved. All images used with permission. Unless otherwise attributed, all images licensed under Creative Commons CC0 license. This site is protected by reCAPTCHA and the Google Privacy Policy and Terms of Service apply.