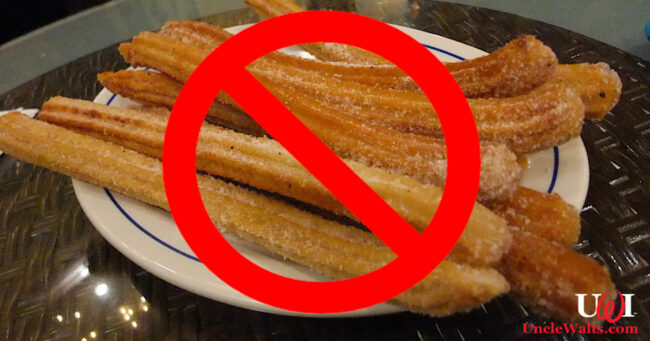 Nothing says “overbearing dictator” like denying citizens their Churros.

ANAHEIM, CA — While Disney continues to box up Disneyland for the move to Texas, even bigger news has dominated the headlines. California Governor Gavin Newsom (D estroyer of Economies ) is facing a recall from angry voters.

Newsom’s previous orders, while strict, were at least limited in scope, with only trying to run a small business, restaurant, or theme park banned. The new order is far more comprehensive — and one detail in particular has the remaining 47 California residents up in arms.

The governor’s latest decree, issued from his VERY comfortable home, states that no one should do anything inside the state of California. And in the fine print, the order specifically singles out the sale of Churros as prohibited.

Every breath you (don’t) take

The new ban is extremely thorough, even prohibiting breathing. While oxygen deprivation would probably go unnoticed by Newsom’s voting base, critics say that many normal people actually rely on a steady supply of oxygen.

Health experts, however, suggest that those who wish to continue normal respiration are being selfish and want to kill their grandparents. They urge the general public to give up breathing just for a few weeks to stop the virus “for the greater good.” [Ed.: Hey, wasn’t that Grindlewald’s slogan?]

One step too far

While the ban on everything is severe, what finally drove angry residents over the edge was in the fine print, and that is a ban on the sale of Churros. In previously-reported financial results, the Churro was the only thing keeping Disney from folding like a politician facing a real job.

Disney CEO, Bob “boB” Chapek spoke with Uncle Walt’s Insider, sharing, “The Churro is the only thing keeping this sinking ship afloat. And it’s not just the Disney corporation, but I mean this whole doomed state. Despair, hopelessness, and fear all fade away in the presence of a Churro. I…. I just can’t imagine what is going to happen if we lose the Churro.

“Now, if you’ll excuse me, the Notorious BiG [Ed.: He means Bob Iger] is meeting me to continue our Mandarin lessons. Word on the street is we’re going to need them around mid-January…”

Mandarin? We’ve been focusing on Cantonese!!! What should we do? Let us know in the comments below!

December 23, 2020 by Walt in California
© 2020 Uncle Walt's Insider. All rights reserved. All images used with permission. Unless otherwise attributed, all images licensed under Creative Commons CC0 license. This site is protected by reCAPTCHA and the Google Privacy Policy and Terms of Service apply.