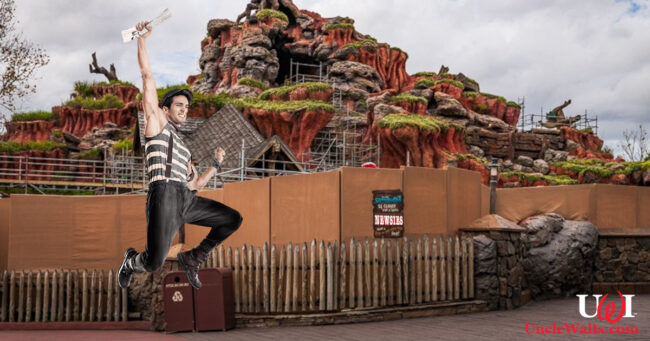 You’ll plummet to the sounds of “Seize the Day,” perhaps?

SOMEWHERE IN TEXAS — In a rather odd announcement, Disney announced today that the “Critter Country” section of Texas’ Disneyland Park will be rethemed, but the company would not say for sure what the new theme would be. Instead, they gave a cryptic hint at one of the possibilities.

When Uncle Walt’s Insider reached out to our normal contact, Disney (the company) spokesperson Jun Disney (no relation), we discovered that she had changed her voicemail message. The new message states: “I’ve got nothing if I ain’t got Santa Fe.”

It’s a clue, like on the back of the Declaration of Independence

Based on this, we are forced to conclude that Disney will be creating a “Newsies” themed area of the park, in the place of Critter Country.

Newsies, of course, is the 1992 Movie and/or 2011 Musical about the New York newsboys strike of 1890. Newsies, of course, was phenomenally popular, leading to tens of people per year requesting that Disney build a theme park attraction based on the show.

We really should get paid for product placement

The plot of the show involves a striking newspaper carrier who decides he needs a new SUV, and that a Hyundai Santa Fe would be the perfect vehicle for him. His big song at the end of Act One includes the line from Disney (no relation)’s voicemail greeting, “I’ve got nothing if I ain’t got Sante Fe.”

Critter Country has been home to Splash Mountain and The Many Adventures of Winnie The Pooh. As of now, it is unknown whether the planned Newsies re-theming will impact the already announced retheming of Splash Mountain to The Princess and the Frog, which is far less popular and features far fewer Alan Menken songs.

We were hoping for an Apple Dumpling Gang area ourselves. How about you? Let us know in the comments below!

November 14, 2020 by X in California, World
© 2020 Uncle Walt's Insider. All rights reserved. All images used with permission. Unless otherwise attributed, all images licensed under Creative Commons CC0 license. This site is protected by reCAPTCHA and the Google Privacy Policy and Terms of Service apply.