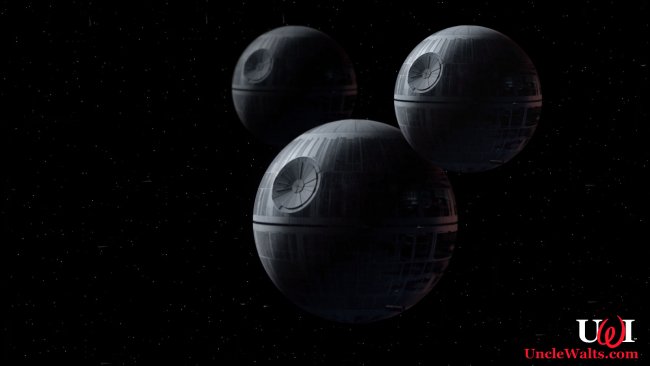 “Abandon our plans? In our moment of triumph?”

BURBANK, CA — Construction continues on the Star Wars: Galaxy’s Edge themed lands at all three U.S. Disney parks, despite a serious flaw found in the design plans. Disney intern Scott “Flip” Palledorous, who discovered the potentially fatal defect, has so far been unsuccessful in getting anyone in authority to realize the seriousness of the issue.

“Look, I’ve crunched the numbers,” Palledorous says, “and spent hours and thousands of dollars at Starbucks pouring over the plans. All it will take is one of those bathrobe-wearing nerf-herders flying in from Universal on their stupid mops to shoot one or two fireballs into a particular thermal exhaust port on the backstage side of Galaxy’s Edge. And then it is game over, man. Game. Over.”

“Soon they will be crushed”

Officials with both Imagineering and the construction firm overseeing the build, E.M.P.I.R.E. Builders, Inc., have reviewed the plans and report the flaw is not considered to be serious and have no plans to halt construction.

At a recent press junket (that we weren’t invited to and had to sneak into; we are not bitter about one bit, but still crushed), Uncle Walt’s Insider asked Disney’s  Chairman, CEO, and Talking Head Bob Iger about this recent report.

Mr. Iger rubbed his hands together and said, “There is no flaw. The only flaw comes from our competitors, who fail to comprehend just what we are doing. Soon they will be crushed when we put on display, in a soft opening for Cast Members and Annual Passholders, the full power of our fully-constructed and operational land dedicated to the dreams and vision that started in theaters on May 25, 1977.”

As we watched, intern Palledorous approached Iger to again express his concerns about the design flaw and the potential advantage it could give Universal. Iger replied, “Abandon our plans? In our moment of triumph? I think you overestimate their chances.”

Uncle Walt’s Insider reached out to several third party architectural firms for comment about the design. They all just told us to quit calling and also asked that X stop watching them from the bushes.

We will continue to follow this story as long as our attention span will allow and update you when we know more… about this, uh, serious… churro shortage?

Churros or Galaxy’s Edge? What in the heck were we talking about again? Comment below!

August 14, 2018 by Walt in California, Florida, Other
© 2020 Uncle Walt's Insider. All rights reserved. All images used with permission. Unless otherwise attributed, all images licensed under Creative Commons CC0 license. This site is protected by reCAPTCHA and the Google Privacy Policy and Terms of Service apply.