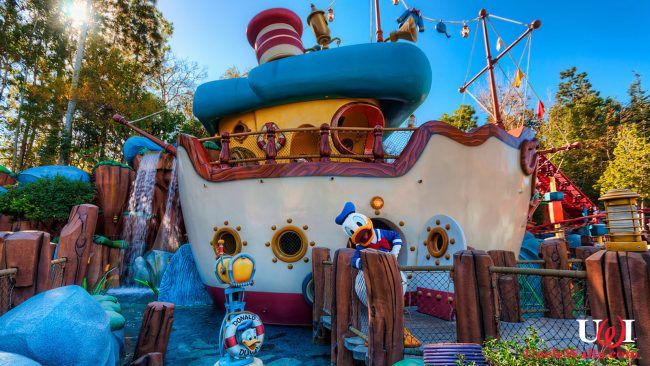 TOONTOWN, U.S.A. — In the latest maritime blunder, Donald Duck’s Boat (and home) sunk while docking over the weekend. Cast members at Disneyland Park who witnessed the sinking first thought it was part of the recently-announced “shipboard shore excursions”; or possibly that Donald was allowing one of his nephews to dock the boat, similar to the Disney Dream incident.

Initial reports from investigators Chip and Dale (in their Rescue Rangers outfits) point to Donald’s neighbor and longtime friend Goofy, who was in charge of watching the boat as it docked and signaling to Donald when to stop. In a statement released by Goofy’s attorney, however, Goofy claims that he had nothing to do with the incident and points to a lack of understanding due to a communications breakdown.

We reached out to Donald Duck for his side of the story, and we could not understand one stinkin’ word that came out of his mouth (and we’d forgotten our Donald Duck to English Translation Guide).

Chip and Dale (in their Rescue Rangers outfits) anticipate that the investigation will take years to complete, at a billable rate of 275 acorns per hour.

Who do you think is to blame? Let us know in the comments below!

April 18, 2018 by Walt in California
© 2020 Uncle Walt's Insider. All rights reserved. All images used with permission. Unless otherwise attributed, all images licensed under Creative Commons CC0 license. This site is protected by reCAPTCHA and the Google Privacy Policy and Terms of Service apply.