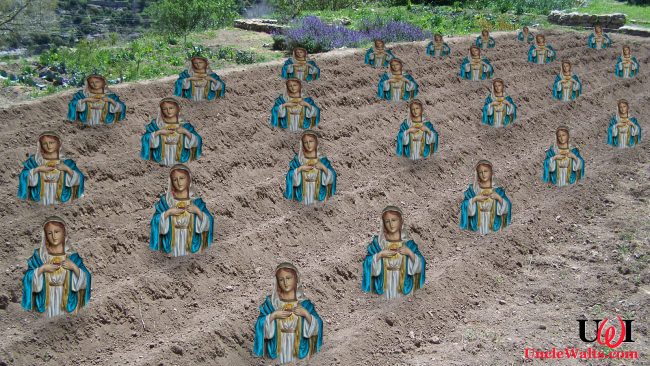 Coming up after that? Knott’s Carey Farm: a tribute to Drew Carey.

BUENA PARK, CA — The spooky Halloween version of Knott’s Berry Farm, called Knott’s Scarry Farm, is winding down. Soon the park will get its annual Christmas decorations up and be temporarily renamed “Knott’s Mary Farm,” as a tribute to the Virgin Mary.

Theme park history fans will know, of course, that KBF’s founder, Don Knotts, was a lifelong Catholic who left the priesthood to play Barney Fife on the popular Andy Griffith Show. On establishing his theme park in 1834, he dedicated it to the Blessed Mother, with instructions that during every holiday season, the park would be filled with tributes to her.

Visitors to Knott’s Mary Farm will be treated to a variety of nativity scenes — some live! — and Ave Maria will be playing on a loop throughout the park. In respect to the reverent atmosphere, no rides will be operating until the theming is removed in January.

Parkgoers will find that all of KBF’s famous restaurants will be open as usual. However, on Fridays, only fish will be served. And churros; Mary loved churros (it’s in the Apocrypha somewhere).

October 28, 2019 by Marty in California
© 2020 Uncle Walt's Insider. All rights reserved. All images used with permission. Unless otherwise attributed, all images licensed under Creative Commons CC0 license. This site is protected by reCAPTCHA and the Google Privacy Policy and Terms of Service apply.