Florida Toy Story Land “Made in China,” imported from Shanghai 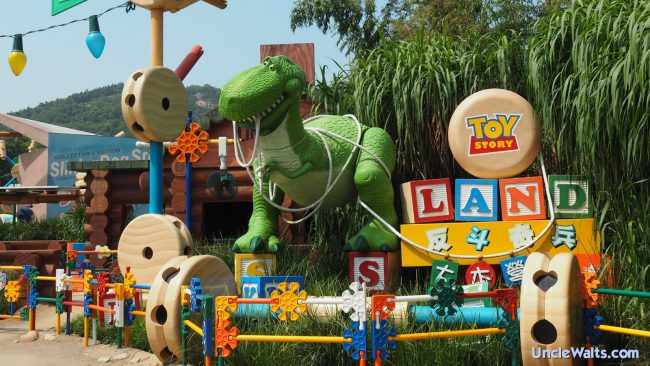 “Disney wants things to seem real, and toys are made in China.”

Disney fans in the United States are celebrating the recent announcement of the opening day of the new Toy Story Land at Disney’s Hollywood Studios (June 31, 2018), but international fans are not so excited. For months, guests at Shanghai Disneyland have been treated to views of what appeared to be construction of their own Toy Story Land. Now it appears, though, that Shanghai’s construction was not for their own land, but only a staging area for Florida’s.

A Pixar hit comes to life

Toy Story, the 1995 live-action film featuring a heavily-costumed Tom Hanks and Tim Allen (and often mistaken to be computer-generated), is a favorite for kids of all ages. It combines a fun story featuring action, humor, dismemberment and insanity with a heavy dose of nostalgia, and it continues to be one of the most successful toy-centric movie franchises in history, topped only by the Star Wars films.

When Disney Parks and Resorts announced two years ago that Toy Story Land would become a reality and construction walls went up at Disney’s Hollywood Studios and Shanghai Disneyland, guests at both parks were elated. Fans in Shanghai were the first to see giant, oversized character and toy props from the films arrive — but lately, those same props have been disappearing from Shanghai’s park and reappearing at Hollywood Studios.

“Yeah, a lot of people in Shanghai somehow got the impression that they were getting their own Toy Story Land,” Disney Parks and Resorts spokesperson Hanna Snider tells Uncle Walt’s Insider. “And, sure, we share some responsibility for that, since we, you know, announced it and all. But we didn’t say they were getting a permanent Toy Story Land.”

Then why put up construction walls in Shanghai? “Well, it’s all about realism,” Snider explains. “Disney wants things to seem real, and toys are made in China. So when it came time to add Toy Story Land to the Studios in Florida, we thought, let’s build everything in China so that those ‘Made in China’ stamps on everything are authentic.”

She continues, “It’s unfortunate that when we put up the walls next to Shanghai Disneyland to have a storage place for all the decorations and props that were destined for Florida, some overeager intern in the Marketing Department started talking about Shanghai getting their own Toy Story Land. But that’s Marketing for you. Most of them have art degrees and like cream cheese-stuffed pretzels, for crying out loud.”

Will this news affect your plans to travel to Shanghai? Comment below!

March 5, 2018 by Marty in Florida, World
© 2020 Uncle Walt's Insider. All rights reserved. All images used with permission. Unless otherwise attributed, all images licensed under Creative Commons CC0 license. This site is protected by reCAPTCHA and the Google Privacy Policy and Terms of Service apply.