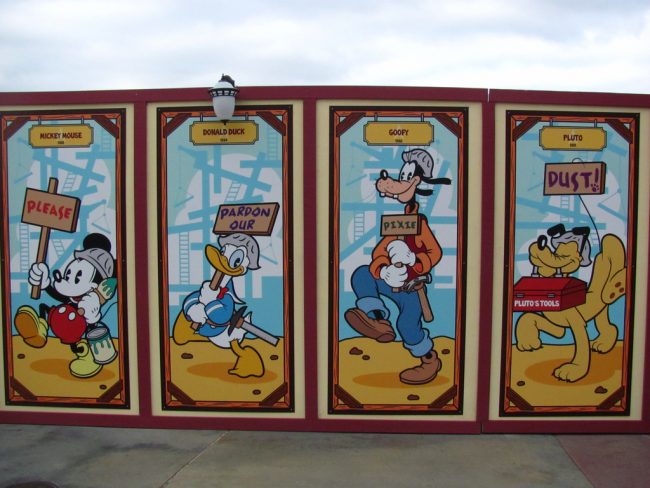 With the ongoing construction of the new Toy Story Land and Star Wars: Galaxy’s Edge areas, Disney’s Hollywood Studios Park is in the middle of some major changes. And while most guests see the many walls blocking off the construction areas as an annoyance, Disney is finding an opportunity for making magic out of the nuisance.

In a press release dated today, the Walt Disney World Resort has announced that they will soon begin offering a behind-the-scenes tour called “The Magic of Construction Walls.” This new tour will take guests throughout Disney’s Hollywood Studios Park to examine the approximate 27 miles of construction walls currently in place in the park.

The press release quotes Disney Imagineer Ezra Wang as saying, “A lot of thought goes into these walls. Disney is in the business of story-telling, and we want these construction walls to tell a story as well. And ideally, we want that story to be more than, ‘You can’t come in here now.'”

Guests on the tour will not only be able to examine the portions of the walls visible to other guests, but will be taken into the construction areas to see the other side.

“It’s an exciting thing,” Wang says. “The construction workers often write on the side of the walls opposite the guest areas, and for the first time our guests can be entertained by the graffiti that’s normally out of sight.” The release notes that for that reason, the tour is only open to guests ages 21 and up.

Guests who might take the tour hoping to get a sneak peak at the new construction may be disappointed. “This is not a tour of the new lands, just the construction walls,” according to Wang. “In fact, we’ll be putting up second walls behind the first ones to block the tour from seeing the new areas.”

Separate theme park admission is required. For an additional fee, guests may purchase and take home the mouse-ear hardhats they wear on the tour.

October 21, 2017 by Marty in Florida
© 2020 Uncle Walt's Insider. All rights reserved. All images used with permission. Unless otherwise attributed, all images licensed under Creative Commons CC0 license. This site is protected by reCAPTCHA and the Google Privacy Policy and Terms of Service apply.