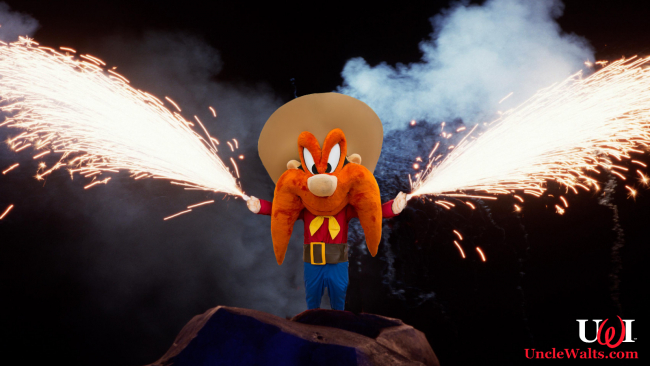 The music, fireworks, and character spectacular will take us into Yosemite Sam’s imagination.

VALENCIA, CA — “Be there as the forces of good and evil battle it out in Yosemite Sam’s dream during this extravagant open-air nighttime musical.”

That’s how Six Flags describes their new live-action outdoor show, Sam-Fram-Tasmic! According to the press release, Sam and a host of licensed Warner Brothers cartoon characters will appear in the show.

“It’s going to be amazing,” Six Flags (the company) spokesperson Jun Flags (no relation) tells Uncle Walt’s Insider. “Sam will appear magically and begin conducting fountains, lasers, and fireworks. Other characters will show up as incredible and beautiful scenes are acted out right before your eyes. Then the bad guys try to take over! Sam has to battle them to reclaim his dream, before it becomes a ‘nightmare fan… sam-fram-tasmic.’

The show will first open at Six Flags Magic Mountain (Sam actually appears on top of the Mountain at the end of the show!), and to other Six Flags parks later.

Have you ever climbed Magic Mountain? Let us know in the comments below!

February 28, 2019 by Marty in California, World
© 2020 Uncle Walt's Insider. All rights reserved. All images used with permission. Unless otherwise attributed, all images licensed under Creative Commons CC0 license. This site is protected by reCAPTCHA and the Google Privacy Policy and Terms of Service apply.