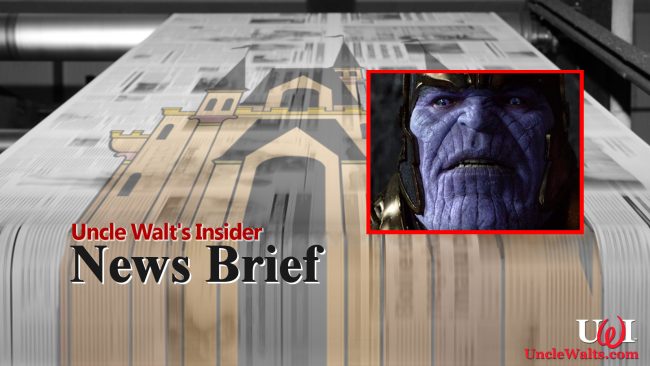 Ever since the Disney Company brought Marvel and its stable of superheroes into the fold, they have wasted no time in developing shows and attractions based on Marvel properties. From the Guardians of the Galaxy Mission: Breakout ride at California Adventure to the as yet unnamed roller coaster taking over the former Energy pavilion at Epcot, and from Groot-shaped churros [Ed.: This is actually brilliant, and should be a thing. Someone make this happen.] to Avengers-themed sky cars on the new coast-to-coast Skyliner, Disney Parks and Resorts and Spas has an estimated 3,158 different Avengers-themed projects in the works or already built.

Actually, make that 1,579 different projects. Reports have now surfaced that approximately two weeks ago, exactly half of the Avengers-themed projects at the various Disney parks suddenly turned to ash and blew away in the wind.

Uncle Walt’s Insider will keep you posted on this disturbing story as updates become available. Oh, and also, spoiler warning.

May 16, 2018 by Marty in California, Florida, Other, World
© 2020 Uncle Walt's Insider. All rights reserved. All images used with permission. Unless otherwise attributed, all images licensed under Creative Commons CC0 license. This site is protected by reCAPTCHA and the Google Privacy Policy and Terms of Service apply.