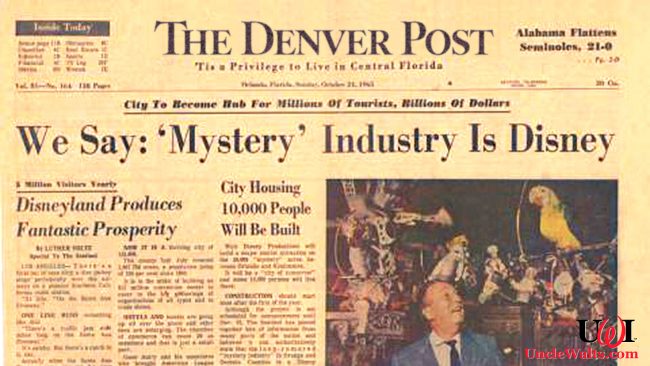 “The River Mile” project may have been a front for the Mouse!

DENVER, CO — Elitch Gardens (just “Elitch’s” to the locals) was a beloved theme park in west Denver with roots going back to the late 1800’s. Eventually, in 1995, the name (but not the “beloved”) moved downtown, becoming a generic cookie-cutter amusement park monstrosity with great views of the mountains.

(Then again, just about any place in Denver has great views of the mountains. It’s not like they’re hard to see. That doesn’t make whatever you build a good thing.)

Attendance numbers haven’t been great, and rumors of Elitch’s closing have been circulating for years. And in 2018, a “River Mile” redevelopment project including the property was approved, leaving the future of the park in doubt.

Well, Uncle Walt’s Insider can confirm that there is a new rumor floating around — the Disney Company is behind the redevelopment of Elitch Gardens Theme Park! (We can confirm that this is a rumor with confidence, because we started it!) Now that Disneyland Escanaba is up and running, Disney is looking to expand again!

Details are sketchy now, but apparently the rumored plan is to convert 43 square miles of swampland on the west side of downtown Denver into a family-friendly entertainment resort.

The so-called “Colorado Project” will feature multiple theme parks, dozens of resort hotels, lakes and water sports, golf courses, a shopping district, and one or two water parks. The project’s centerpiece will be an experimental prototype city of tomorrow, where people will actually live and work! (Unlike downtown Denver.)

All of this, and it will have great views of the mountains! Uncle Walt’s will keep you posted as get updates on this story.

Actually, true Denverites would probably be happier if it just went back to 38th Street, right? Let us know in the comments below!

Cover photo: The actual headline from the Denver Post if this were real! Photo mostly from the Orlando Sentinel.

May 2, 2020 by Marty in World
© 2020 Uncle Walt's Insider. All rights reserved. All images used with permission. Unless otherwise attributed, all images licensed under Creative Commons CC0 license. This site is protected by reCAPTCHA and the Google Privacy Policy and Terms of Service apply.