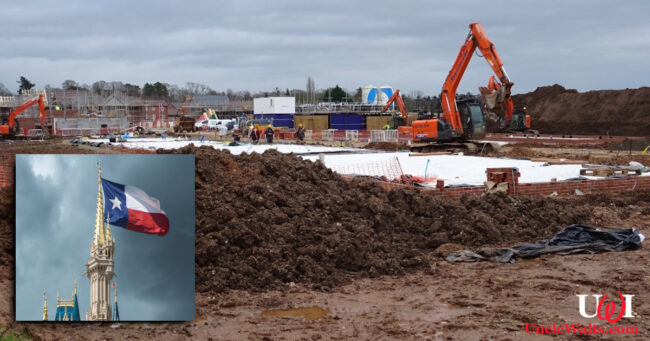 It’ll be so easy to get to!

FUTURE SITE OF DISNEYLAND TEXAS — Are you as excited as we are for the newly-relocated Disneyland in Texas? Uncle Walt’s Insider is thrilled to announce that ground has been broken, and construction has begun! And the new location is just where many predicted it would be.

Your reporter was invited on a tour of the property, led by Disney (the company) spokesperson Jun Disney (no relation).

After a bit of a delay in my getting to the site — Google Maps doesn’t have it listed yet, though we’ve submitted the request — we met at a spot that Disney (no relation) described as “the future Main Street USA.” I parked my rental car, and Disney (no relation) drove me around on a golf cart, once I’d donned the required protective gear, of course (hard hat, face mask, and three-fingered cartoon gloves).

Disney (no relation) was ebullient.

“It’s been so hard keeping the location a secret,” Disney (no relation) says. “Not just officially, I mean. It’s been hard for me to keep it quiet. Okay, I might have told my Gram-gram, but the nursing home she’s in is on lockdown, so I knew the story wouldn’t spread.

“But just look at this location. It’s perfect! Lots of wide open space, away from the hubbub of modern life, yet so convenient to major population centers and multiple airports!”

I had to admit she was right. And inside, I was bursting that I would be the one to break the story. I get to tell the world where the new Disneyland will be located!

“You know, here in Texas we have something special we never enjoyed at Disneyland: the blessing of size. There’s enough land here to hold all of the ideas and plans we can possibly imagine,” Disney (no relation) shared. “And you can quote me on that!”

What do you think of the new location? Let us know in the comments below!

October 18, 2020 by Marty in California, World
© 2020 Uncle Walt's Insider. All rights reserved. All images used with permission. Unless otherwise attributed, all images licensed under Creative Commons CC0 license. This site is protected by reCAPTCHA and the Google Privacy Policy and Terms of Service apply.