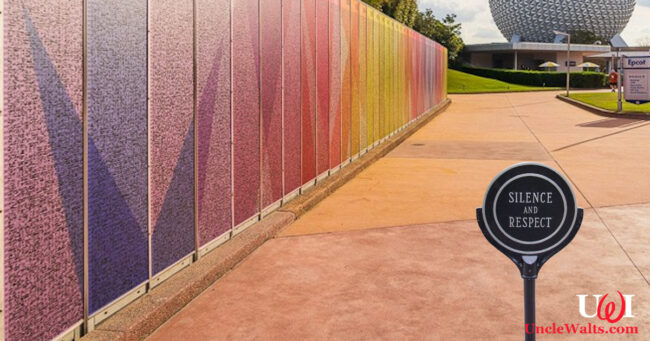 Apparently they found a found a licensed funeral director willing to help.

EXPERIMENTAL PROTOTYPE COMMUNITY OF TOMMOROW CENTER, FL — In a move that has shocked a few people, Disney has returned the “Leave a Legacy” monoliths to the front of the Epcot Centre Center. The monoliths, which were removed starting in 2018, have been relocated from inside the park to outside the main entrance.

The Leave a Legacy monoliths were often referred to as tombstones. However, Disney executives have repeatedly denied that they are memorials for the guests who never made it out of the park. In fact, one executive, who refused to be named [Ed.: Hi Josh!] even spoke on the record:

“No. Those are not memorials for the guests who never made it out of the park,” our source told us. “As far as we know, Martin Short is the only person who ever got stuck in the Canada movie and never made it to his Soarin’ FastPass.”

When the monoliths reappeared (with a brand new coat of neon paint, no less!), we spoke with Disney (the company) spokesperson Jun Disney (no relation). “These are brand new. It’s something we’ve never done before. Allowing regular park guests to put their photos inside one of our parks? It’s an amazing new idea!”

We asked Disney (no relation) again whether the markers contain human remains. “You know I can’t comment on that,” she replied. “However, we have placed signs asking guests to maintain a respectful silence when viewing the Leave a Legacy markers.”

Would you like to be buried by the Epcot parking lot? Let us know in the comments below!

February 16, 2021 by X in Florida, Uncategorized
© 2020 Uncle Walt's Insider. All rights reserved. All images used with permission. Unless otherwise attributed, all images licensed under Creative Commons CC0 license. This site is protected by reCAPTCHA and the Google Privacy Policy and Terms of Service apply.