How does a churro from a Mexican restaurant stand up to those found at the Disney parks? Droopy.

ROCHESTER, WA — When you can’t visit the parks because you’re stuck at home in the age of social distancing, an authentic Churro will have to do.

You, like us, have come to adore the churros at Walt Disney World and Disneyland. That crispy, slightly chewy, cinnamon-y treat with which some would say that the majority, or perhaps all of, our staff have become… what’s the word? Ah, yes. “Obsessed.”

And while they’re not entirely wrong, the possible misconception rings to a deeper truth: that the Disney churro has no equal. So yes. Call us obsessive. 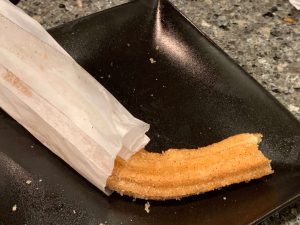 The bent churro in question, about which this article was written. No churro should bend like this. [Ed.: And Ub should never be allowed to write captions again.] Photo by Ub. Which is why he’s not our photographer.

You could also call me deprived for the first thirty-seven years of my life. You see, it was not until then that I would savor my first churro. The good news, however, was that it was a Disney churro. Until that time, I had to settle for other foods, and I did not understand the joy of the churro. Why, even as I write, I can hear Walt and Marty weeping in their cubicles. That reminds me, I need to get a typewriter so that I don’t have to dictate my stories. Where was I? Ah, yes.

Raised in a home where nary a Disney movie played nor churros were consumed, it becomes difficult at best to come up with a wandering story about churros in my past. Indeed, the joy of churros is but a moment of my life, though fried ice cream may take a close second.

With Taco Tuesday falling on Cinco de Mayo, or as we at Uncle Walt’s like to call it, Churro de Mayo, combined with the sheltering in place which we practice at the present time, I decided to find the best place in Portland to deliver the perfect Cinco de Meal for Dos at my cottage in Troutdale. From the time I sent my order through UbEats – or was it UbHub? One of those. Anyway – until it arrived at my summer cottage in Rochester, Washington, it seems that the food had sat in the bag for a while.

Finally, we get to the point

It also took us time to eat through the enchilada plates, rice and beans, endless bag of chips and salsa, another enchilada, and of course, for Taco Tuesday falling on Cinco de Mayo, tamales.

Due to the time it took for the rest of the meal, as well as the amount of food we consumed, and the required mid-meal siesta, the grand finale, the churros would wait for over an hour and a half. We placed them in the fridge for food safety. By the end of the meal, they were simply too cold to consume.

We lovingly placed the churros into our vintage microwave and set the timer. At the sound of the bell, we pulled the churros out, and quickly concluded that three minutes may have been a tad too long. My wife keeps telling me that it’s going to skew the results of this write-up. I think it’s just that it’s not a Disney churro.

Sorry… NOW we get to the point

When the churros finally cooled down enough that we could pick them up without scalding ourselves, we found them to be limp. I grabbed mine in the middle and the ends simply drooped around my hand. Only somewhat crestfallen, I proceeded to raise it high above my head and drop one limp end into my mouth – the first bite.

I’d like to say that I found myself magically transported back to Main Street, USA, but I’d be lying. Perhaps if Main Street USA had a slight curve to the left, this churro would have fit in perfectly. It showed decent flavor – I’ve heard that it’s difficult to mess up the flavor of cinnamon. 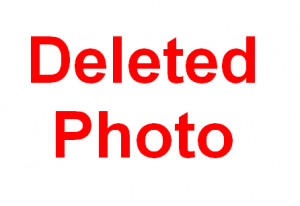 [Ed.: Ub, I don’t know where you found this picture, but that was NOT a churro.]

Still, I found myself longing for the churros of Disney – the churros that stand proudly in your hand, the ends extending a foot or more each direction, depending on the size of your hand. Instead, I found myself experiencing what it must have been like to teethe as a toddler.

I do not have, nor have I found a recipe for Disney’s churros, [Ed.: I found this first thing if you Google “Disney churros”] but if I should come across it, I will post it below.

In the meantime, we should all look forward to the time when we can all once again enjoy this impossibly-difficult-to-prepare treat. [Ed.: That blog makes it sound pretty simple. Like… seven ingredients.]

Do you think churros from anywhere else are as good as those found at Disney theme parks? If so, what’s wrong with you? Let us know in the comments below!

May 8, 2020 by Ub in Spotlight, Uncle Walt's Food Blog
© 2020 Uncle Walt's Insider. All rights reserved. All images used with permission. Unless otherwise attributed, all images licensed under Creative Commons CC0 license. This site is protected by reCAPTCHA and the Google Privacy Policy and Terms of Service apply.