We review a Sith bakery in honor of Star Wars Day, May the Fourth. And because we’re Uncle Walt’s Insider, we do it a day late.

LAKE BUENA VISTA, FL — “Come to the dark side,” they said. “We have cookies.”

Now, I’m not sure who the mysterious ‘they’ is, but I had previously heard and ignored this invitation. After all, I figured the cookies would be something uninteresting. Something like Reduced Fat Chips Ahoy, or the iced sugar cookies that Realtors buy by the thousands to hand out at open houses. Or even worse, something that’s actively awful, like Brussel Sprout Newtons.

And then I visited Moff Gideon’s Bakehouse at Disney Springs.

For those who don’t know, Moff Gideon is one of the last surviving imperial leaders of the First Galactic Empire, following the events of Return of the Jedi. Gideon is primarily known for trying (and repeatedly failing) to capture the youngling formerly known as Baby Yoda and presently known as Grogu (who you already know is on our (Step)Mom’s Panel). During Moff Gideon’s free time, he has apparently opened a cookie shop at Disney Springs.

Let’s take a moment to talk about the cookies. These things are gigantic. Each one weighs in at nearly half a pound, and when placed on top of a US Dollar Bill, will cover nearly 2/3 of the bill. 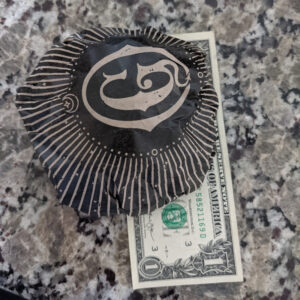 But how’s their aim?

Although Moff Gideon was not present when I visited, his employees were the picture of what Imperial Shopkeepers should be. Efficient, well mannered, and well groomed. The line, in true Imperial fashion, was orderly and moved quickly.

After about 30 minutes in line, I reached the inside of the shop, and was soon called up to the counter to place an order. I ordered 4 cookies, plus a giant slice of cake. Here’s what I found

[Ed.: Although we have seen no evidence that Moff Gideon is a Sith, he is able to wield the Dark Saber, which implies some level of force sensitivity.]

Do you know any good cookie recipes that don’t come from the dark side? Let us know in the comments below!

May 5, 2021 by X in Florida, Spotlight
© 2020 Uncle Walt's Insider. All rights reserved. All images used with permission. Unless otherwise attributed, all images licensed under Creative Commons CC0 license. This site is protected by reCAPTCHA and the Google Privacy Policy and Terms of Service apply.