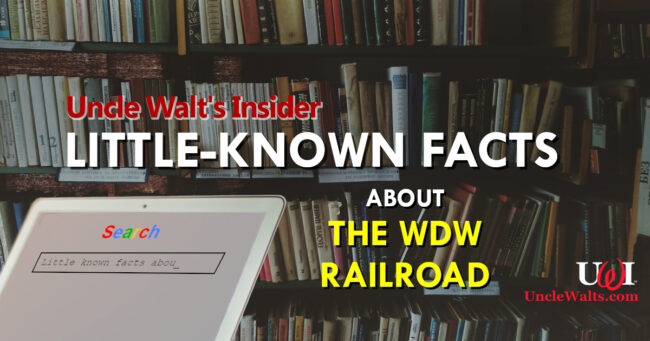 Ah, nothing says you’ve arrived at Walt Disney World like hearing the whistle from the steam train as you go through the gates at the Magic Kingdom! … Except passing under an entrance arch. … And seeing the purple road signs. … Oh, and catching a glimpse of the monorail for the first time, smelling freshly-made churros, meeting Mickey Mouse…

Okay, fine, there are actually lots of things that say you’ve arrived at Walt Disney World. Hearing the whistle is probably still, like, in the top 30, though. But do you know everything there is to know about Walt Disney’s favorite steam trains that he never got to ride?

If not, don’t despair! Uncle Walt’s Insider is here to provide some incredible, newly-discovered trivia about the Walt Disney World Railroad!

It is named for the famous explorer Dr. Albert “Rail” Road.

Some of his favorite plants can be seen alongside the tracks.

The top speed of the trains is 12 mph, except on the back stretch, where they can reach speeds of 350 mph.

The trains are actually capable of accelerating from zero to sixty miles per hour in 2.8 seconds.

It will soon connect directly to Universal Studios Orlando, the Orlando Airport, and Port Canaveral.

Due to Covid-19 budget cuts, they only use four.

Once health restrictions are loosened a little more, the bar car will return.

If you dress up in a steam punk outfit, they will let you drive the train.

In fact, to keep costs low, Disney does not hire actual train engineers, but will take folks who have operated model trains.

After hours, Cast Members will often drive the trains on monorail tracks and monorails on the train tracks.

The Lille Belle is a parlour car named for Walt Disney’s wife, Belle.

The Beauty and the Beast character is also named after her.

Despite having cattle catchers on all the locomotives, there is no evidence there has ever been a cow on the tracks.

Hang on… has anyone seen Clarabelle?

Federal law requires that all pool/spa drains that were manufactured, distributed, or sold on or after December 19, 2008 must meet ASME/ANSI A112.19.8-2007 requirements.

Wait, sorry, that was a fact about drains, not trains.

There never was a Casey Sr.

The Spa Car is “clothing optional” after dark.

Masks may still be required.

No, wait, that was hippies. Our bad. [Ed.: Hippies hated trains? or they hated Walt Disney? We’re confused.]

You have a one in three chance of being at the correct station when your order is ready.

And finally… If it’s your birthday, ask the Conductor if you can drive the train backward!

They won’t let you, but still ask.

August 6, 2021 by Marty in Florida, Spotlight
© 2020 Uncle Walt's Insider. All rights reserved. All images used with permission. Unless otherwise attributed, all images licensed under Creative Commons CC0 license. This site is protected by reCAPTCHA and the Google Privacy Policy and Terms of Service apply.