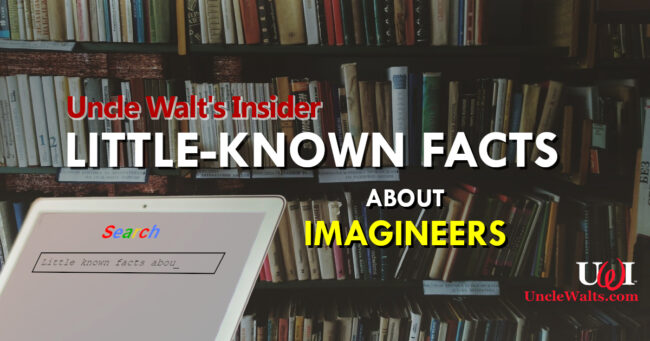 Imagineers are some of Nature’s most misunderstood creatures. Fortunately, we here at Uncle Walt’s Insider are here to clear up the confusion surrounding these cute little guys!

So settle in for some incredible, newly-discovered trivia about Disney’s Imagineers!

The name “Imagineer” is a combination of two words

Walt Disney was the original Imagineer, and played himself on TV

The job interview for an Imagineer consists of imagining stuff

And describing what they imagine to the interviewer, of course.

And they consider themselves to be married to Mickey or Minnie, depending on their preference.

Once they realize they’ve been pranked by the older Imagineers, they renounce those vows and take vows of wealth, promiscuity, and rebellion

And they consider themselves to be free and independent.

Imagineers must be outgoing, extroverted individuals who do not mind being locked behind closed doors for weeks at a time in complete isolation

That’s required when you are struggling to choose between two shades of a color, trying to decide which one best conveys that garbage can is, in fact, a garbage can.

There are three basic divisions of Imagineers: command, who wear gold shirts, science, who wear blue, and engineering, who wear red

The last group is the one that tests new rides.

Another prank on the new Imagineers, we’re afraid. Lost some good red-shirts that day.

Imagineers can eat up to 90 lbs. of food each day, and have front claws of up to four inches long

Wait, strike that. That’s a fact about grizzly bears.

The answer is, unfortunately, kept locked up as a trade secret, along with Walt’s frozen clone, Mickey & Minnie’s marital status, and the exact recipe for their delicious churros.

Imagineers hide a fresh cantaloupe somewhere in every newly-built attraction

Which is why they smell that way.

May 23, 2021 by Marty in Spotlight
© 2020 Uncle Walt's Insider. All rights reserved. All images used with permission. Unless otherwise attributed, all images licensed under Creative Commons CC0 license. This site is protected by reCAPTCHA and the Google Privacy Policy and Terms of Service apply.