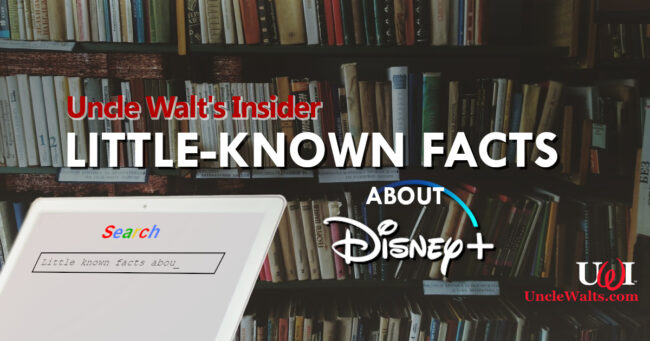 Disney+ has been in operation for 37 years now, ever since Alexander Graham Bell invented the television remote. [Note: do actual research before publication.] It was the world’s first entertainment streaming service, no matter what Knott’s Berry Farm+ claims.

But do you know everything there is to know about the Mouse’s streaming service? If not, don’t despair! Uncle Walt’s Insider is here to provide some incredible, newly-discovered trivia about Disney+!

It was named for the famous explore, Dr. Albert Plus.

He was also a member of the Hontas tribe.

Use code “ANNETTE” when you sign up to receive a special bonus.

It’s not any cheaper or anything, but all the shows will be in black & white.

As part of the Chapek-ing* of everything Disney, watch for the upcoming Disney+ Lightning Lane!

Every movie and TV show will have an extra charge based on popularity, on top of your subscription to Disney+. (*Coined by Uncle Walt’s Insider superfan James McNally.)

To access adult content, press Up Up Down Down Left Right Left Right B A and then Start.

On a related note, certain films have a “DisneyAfterDark” link with additional adult content created by Disney animators.

Some say that the Brother Bear clips are especially disturbing.

Uncle Remus will be animated, though.

But you can use your points for the Disney+ Lightning Lane.

Mighty Ducks 2 is only the second best hockey movie on Disney+.

After “Donald Duck The Hockey Champ,” of course.

The very first program aired on Disney+ was “Video Killed the Radio Star” by The Buggles.

Before long, we fully expect the new Mickey Mouse Club to focus on teen pregnancy and transgender matchmaking competitions.

Whatever you do, do NOT click on the “Bob Chapek’s Shorts” link.

Let’s just say it is not a series of short animated films and leave it at that.

If you go to App Settings and click 38 pixels down and 42 pixels to the left of the SAVE button, absolutely nothing will happen.

This only works on desktop computers running Windows 10.

Spoiler: he recovers from rabies and becomes “Air Bud.”

September 26, 2021 by Marty in Other, Spotlight
© 2020 Uncle Walt's Insider. All rights reserved. All images used with permission. Unless otherwise attributed, all images licensed under Creative Commons CC0 license. This site is protected by reCAPTCHA and the Google Privacy Policy and Terms of Service apply.