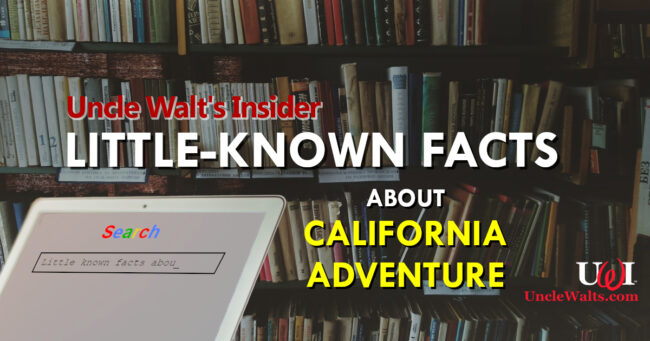 Disney’s California Adventure would have been Walt’s favorite park if he’d been alive to stop it. But how much do you really know about this former parking lot? We’ve done the research so you don’t have to!

So settle in for some incredible, newly-discovered trivia about California Adventure!

It’s not actually themed to California, but a different state with the same name

We’re not sure which one.

They refer to the time as a “paid vacation,” since they didn’t really have to design anything new.

There have been six drownings at Turtle Talk with Crush

They do warn you not to try to jump in the tank.

Radiator Springs is a made up city

We’re actually not completely sure about this. Marty swears he’s been there.

Over 1,000 pounds of chemicals (some caustic) are released into the air of Radiator Springs daily

Somehow their shoehorning Marvel characters into the story just doesn’t work. (Except for T’Challa, of course.)

The Buena Vista Street trolley is capable of speeds up to 275 miles per hour, just like the bullet train in Japan

They keep it throttled back now, after that one mass-casualty event in 2018.

Instead, they have “Hidden Gavins.” [Note: Update this article after the recall.]

If you sneak into the park over a fence, you will not be arrested

In fact, they will give you free food, free clothing, a few hundred bucks spending money each day, and a room at the Grand Californian Resort, Spa & Immigration facility. The park is based on California, after all.

Just like the state of California, everything inside of the park is fake

And will probably cause cancer.

May 29, 2021 by Marty in California, Spotlight
© 2020 Uncle Walt's Insider. All rights reserved. All images used with permission. Unless otherwise attributed, all images licensed under Creative Commons CC0 license. This site is protected by reCAPTCHA and the Google Privacy Policy and Terms of Service apply.