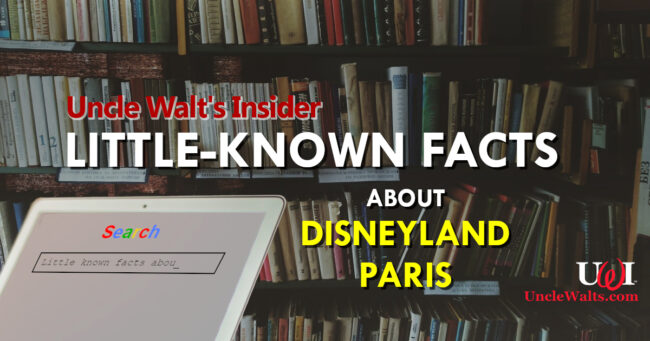 What better way to kick off a new series than with Walt’s original park: Disneyland Paris!

We’re starting a new article series here at Uncle Walt’s Insider, where we unearth some extraordinary facts about theme parks around the world and other park-related topics. Even the most diehard fans may not have heard the info we have!

Since this is a new series, it just makes sense to start off with some incredible, newly-discovered trivia about Walt Disney’s original theme park. So please enjoy these amazing facts about Disneyland Paris!

Disneyland Paris is not actually located in Paris

It’s actually in a different French city with the same name.

For the first 63 years, admission was just one Euro

This led to the park being nicknamed “EuroDisney” in its early years.

We were astounded to learn that most Disneyland Paris CM’s had learned French. They must be a bunch of language prodigies!

The park is mostly rebuilt since the German invasion

Much of Disneyland Paris was damaged during the occupation by Disneyland Bavaria, but has been lovingly restored to how it looked before it surrendered.

There are actually two parks there

If you take the wrong turn while trying to get into Disneyland Paris, you might accidentally find yourself in a tiny area called “Walt Disney Studios Park.” This is apparently considered by Disney to be a completely different park.

Everyone speaks French at the Studios also

Actually, we’re just guessing on this. No one goes there under normal circumstances, so it was hard to tell if it was still open or not.

Disneyland Paris’s castle is made out of real styrofoam

When Walt was building the park, he looked around France and realized that the country actually has real castles made of real stones. So he thought, eh, why bother? and built the castle on the cheap.

The castle’s name is in French

We’re starting to sense a pattern. Hmm. Anyway, the styrofoam castle isn’t called “Cinderella Castle” or “Sleeping Beauty Castle” or anything simple like that. No, they actually gave it the hoity-toity name of “Le Château de la Belle au Bois Dormant,” which means “The Castle of the Beauty of the Boy’s Dorm.”

You have to know where to look for the tunnel entrance, but admission in one park will actually give you access to both! Be sure to have your passport, lots of provisions, and a really good pair of walking shoes before making the hike.

May 20, 2021 by Marty in Spotlight, World
© 2020 Uncle Walt's Insider. All rights reserved. All images used with permission. Unless otherwise attributed, all images licensed under Creative Commons CC0 license. This site is protected by reCAPTCHA and the Google Privacy Policy and Terms of Service apply.