33 (give or take twenty) little-known facts about Club 33! 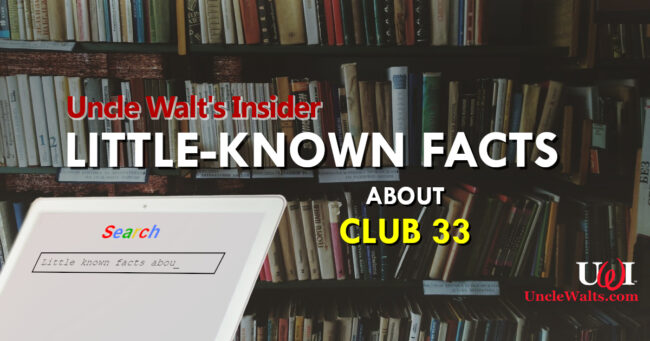 We recently had an Actual ReaderTM [Ed.: We keep forgetting we have those] write to our Step-planDisney (Step)Mom’s Panel, asking about how to get in to dine at Club 33. We, of course, were able to help her immensely (mainly by lowering her expectations).

In the process, we revealed that each and every one of us on the Uncle Walt’s Insider staff has dined at Club 33, which, as you can imagine, really makes us all rethink the value of that experience. (No doubt some actual members are resigning as we speak.)

But it does point out that we know everything there is to know about Club 33, while you, dear reader who has not been there, do not. So read on for some incredible, newly  -discovered trivia about Club 33!

Which in turn was named for the famous explorer, Dr. Albert Waitlist.

Wait, do they just let anyone in?

Pretty sure this article is breaking that rule.

Clubs 1 through 32 are actually levels of Freemasonry.

Keeping track of all those secret handshakes, grips and passwords is pretty challenging.

Making it the second-fastest attraction at Disneyland, after the Main Street Vehicles.

Club 33 was founded by the famous explorer Meriwether Pleasure.

No, wait, that’s the Adventurer’s Club, may it rest in peace.

The Blue Bayou restaurant is officially Club 32 2/3, and Club 33 1/3 is better known as Café Orleans.

Club 45 has a smaller diameter and a larger hole in the center.

We really don’t talk about that one.

Club 33 is the second-fastest rotating restaurant in Disney property.

The fastest, obviously, is Epcot’s Garden Grill, which rotates at an amazing 80 revolutions per minute.

Club 33 is located entirely underground, but through the magic of Imagineering, you climb up stairs or take the lift from ground level to get to the main dining level.

After the queue takes you under the berm.

The Club 33 lift is actually a stretching room.

If you look up when the lighting flashes at the end of the ride, you’ll see where a host hung himself.

Finally, if you can’t get in to the actual Club 33, you can enjoy almost the same experience by dining at the Tony Roma’s on Harbour Blvd and placing a framed photo of Walt Disney on your table.

This does require quite a bit of imagination.

January 2, 2022 by Marty in California, Spotlight
© 2020 Uncle Walt's Insider. All rights reserved. All images used with permission. Unless otherwise attributed, all images licensed under Creative Commons CC0 license. This site is protected by reCAPTCHA and the Google Privacy Policy and Terms of Service apply.