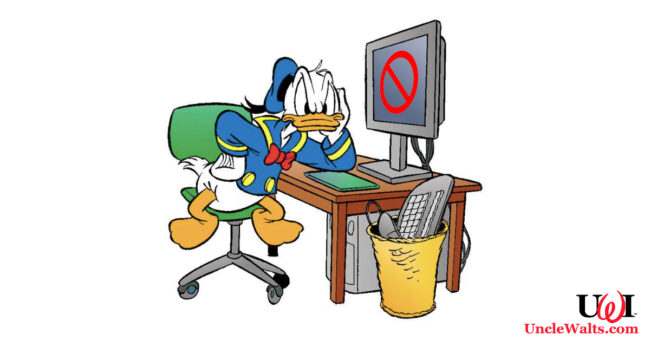 First they came for the ducks, but I did not speak out because I was not a duck…

Head Twit Jack Dorsey announced the move today. “We try to understand The Donald’s tweets, but they are just uncomprehensible most of the time. So given his anger issues and his blatant Nazi past, we figured he must be inciting violence.”

Uncle Walt’s Insider will keep you posted on any developments, assuming we don’t get silenced by our tech overlords as well.

Which Disney character will be banned next? Comment below!

Cover photo: Now that he can’t tweet, think of what he’ll do with all this new time on his hands! Image © Disney.

January 13, 2021 by Marty in Other
© 2020 Uncle Walt's Insider. All rights reserved. All images used with permission. Unless otherwise attributed, all images licensed under Creative Commons CC0 license. This site is protected by reCAPTCHA and the Google Privacy Policy and Terms of Service apply.