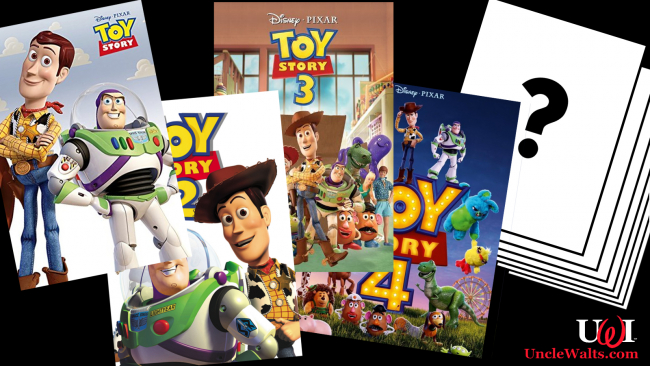 “Just when I thought I was out, they pull me back in.” Woody, Toy Story 3

EMERYVILLE, CA — Since 1995, we’ve thrilled to the adventures of Woody, Buzz Lightyear, and their friends. The Toy Story movies have taught us about friendship, loyalty, love and trust.

But more than that, the Toy Story films teach us this: no matter how many times you think the story is over, they can always think of one more! And we’re not just talking about the gritty live-action reboot that’s already been announced.

Most of us thought the original Toy Story was a nice, self-contained adventure. Then Toy Story 2 came along, and was in many ways even better — but again, it provided a clean ending to the saga. We were worried about Toy Story 3, but it was a powerful and wonderful movie. And it finished up the series completely. No need for another movie at all.

Until this year’s Toy Story 4, where Woody, Bo Peep, and some psychopath name Forky gun down crowds at a county fair. (Disclaimer: we’ve only seen the previews, and we weren’t paying very close attention.) And now it seems that there is no end to the Toy Story movies.

Pixar Studios has now confirmed that at least ten new films are in the pipeline for release over the next several years, in what they are calling Phase II of the Toy Story Cinematic Universe.

Three of the films will be a trilogy of prequels. (The original Toy Story is now officially called “Toy Story Episode 4: A New Hope.”) These three films are tentatively titled Toy Story: Origins, Toy Story Reloaded, and Toy Story Revolutions. Mixed in with the prequels will be origin stories for most of the characters. (We’re most looking forward to “HAMM: A Toy Story Story“.)

Finally, the “Woody Saga” will continue with Toy Stories 8, 9, & 10, which would be 5, 6 & 7 under the current numbering scheme. Uncle Walt’s Insider will of course provide more details as they become known.

Which character’s origin story are you most excited about? Let us know in the comments below!

June 27, 2019 by Marty in Other
© 2020 Uncle Walt's Insider. All rights reserved. All images used with permission. Unless otherwise attributed, all images licensed under Creative Commons CC0 license. This site is protected by reCAPTCHA and the Google Privacy Policy and Terms of Service apply.