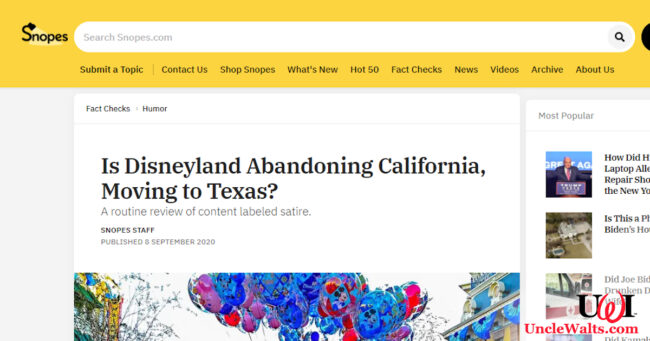 Hey, we make stuff up, too, but we still have standards.

UNCLE WALT’S INSIDER H.Q., SVALBARD — David Mikkelson, newly-unemployed co-founder of the “Snopes.com“ “fact-checking” “website” may be looking for a new place to write. But it won’t be at Uncle Walt’s Insider.

While some may think it’s a great fit — writing under an assumed name, making stuff up, plagiarism — we really can’t see it working out. For as both of our regular readers know, we strive at all times to maintain a minimum 17% accuracy rate. And having seen much of Mikkelson’s work, we’re afraid he just won’t be able to reach that level.

We at Uncle Walt’s wish Mikkelson the best and know he’ll land on his feet. After all, between the “fact-checkers” on the major social media networks and serial plagiarists in the highest levels of government, his skills are in great demand.

Would you hire him? Let us know in the comments below!

August 21, 2021 by Marty in Other
© 2020 Uncle Walt's Insider. All rights reserved. All images used with permission. Unless otherwise attributed, all images licensed under Creative Commons CC0 license. This site is protected by reCAPTCHA and the Google Privacy Policy and Terms of Service apply.