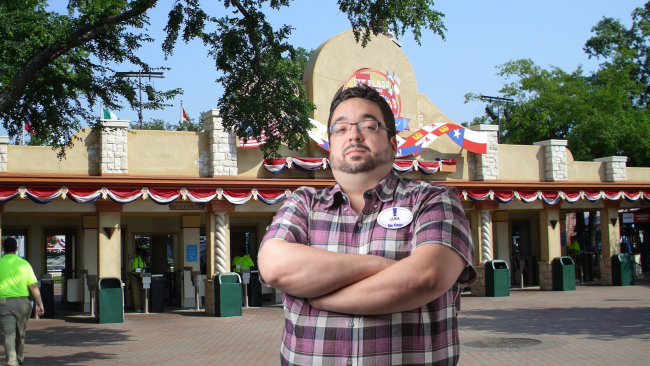 Six Flags of Texas employee Luka Fisher loves his job. He just wishes it were somewhere else — specifically, at one of Walt Disney World’s four Florida theme parks. And often, in his head, that’s exactly where he is.

Fisher, a 22-year-old native of San Angelo, Texas, who now lives in the Dallas suburb of Grand Prairie, eventually grew out of his childhood fantasy — almost.

“Yeah, as I got older, I figured out I was never going to be able to actually live in the Magic Kingdom. But then in high school, one of my friends mentioned she knew somebody who was going to work there as a Disney cast member.”

Fisher says that was a stunning revelation: “I mean, whoa. It blew my mind. I don’t know why I hadn’t realized it before, but of course it makes sense, people work there. And that meant I could, too. I could get paid to be at Walt Disney World!”

“The next best thing”

From that point on, much to the chagrin of his parents, teachers, and high school career guidance counselors, Fisher pointed his life towards one goal: becoming a Disney cast member. Living in Texas as he does, however, makes that a challenge.

“I knew Disney wasn’t going to pay me to move to Florida; I’d have to swing that on my own,” Fisher continues. “So as soon as I could after graduating high school, I moved to the DFW area and hired on at Six Flags. I’m in my third year here, and I’m saving everything I can for a move out east.”

“I do my best with what I have to work with — I pretend. If I’m working in the Mexico section of the park, to me it’s the Mexico pavilion at Epcot. If I’m assigned to load guests onto El Aserradero [a log flume ride], I’m humming ‘Zip-a-Dee-Doo-Dah’ in my head. And I use the two-finger point all the time. It’s not Disney, no, but for now it’s the next best thing.”

Fisher’s hopes were raised recently with Disney announced that it was building a Texas-themed park in Oklahoma, but as Uncle Walt’s Insider readers know, those plans fell through.

Still, Fisher remains optimistic, and confides that until he makes it to Florida and becomes a cast member, his Six Flags dream job would be to be assigned as an elevator operator on the park’s 300-foot “Oil Derrick” observation tower.

“Can you imagine the fun I could have calling it the Tower of Terror, and asking my guests if they are ready for the big drop?”

January 17, 2018 by Marty in Florida, Other
© 2020 Uncle Walt's Insider. All rights reserved. All images used with permission. Unless otherwise attributed, all images licensed under Creative Commons CC0 license. This site is protected by reCAPTCHA and the Google Privacy Policy and Terms of Service apply.