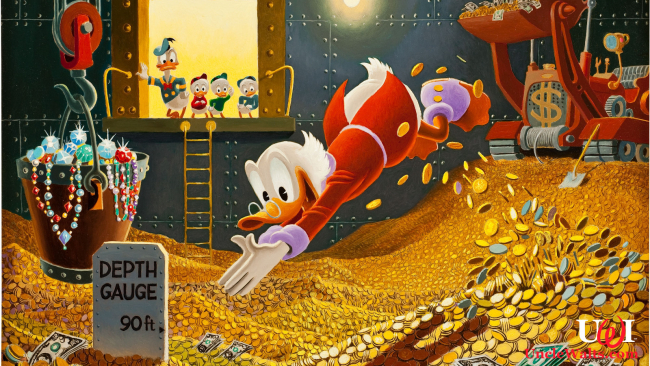 He’s being touted as a replacement for Bob Iger. But what do we really know about him?

DUCKBURG — Famed ultra-wealthy Disney character Scrooge McDuck, the fifth-richest person in the world (and richest duck), is in the running for CEO of the Disney Company when Bob Iger steps down. [Ed.: There’s a “down” joke in there somewhere.] But some detractors say we don’t know enough about him, and are demanding to see his tax returns.

So far, McDuck has refused.

One shareholder [Hi, Susan!], who requested anonymity due to concerns about retaliation, says the secrecy implies problems.

“We need to know more about him before we put him in charge of the Disney empire,” says Ms. Nussbaum. “Are there conflicts of interest there? How did he make his money? And of course, he was born in Scotland. Is his allegiance divided?”

McDuck was quick to respond to the implied disloyalty. Unfortunately, he sent his nephew Donald to answer all of our questions, and we can’t understand a word he says.

Uncle Walt’s Insider will keep you posted if any new developments, um, develop.

Do you have a copy of McDuck’s tax returns? And do you know Susan Nussbaum? Comment below!

May 7, 2019 by Marty in Other
© 2020 Uncle Walt's Insider. All rights reserved. All images used with permission. Unless otherwise attributed, all images licensed under Creative Commons CC0 license. This site is protected by reCAPTCHA and the Google Privacy Policy and Terms of Service apply.