Every 2019 Disney cruise will stop at Castaway Cay 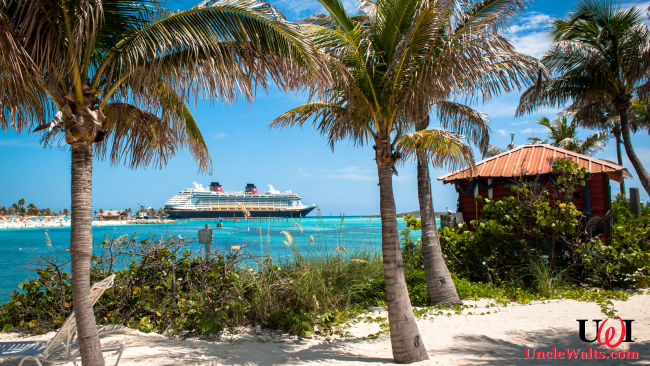 Pacific and European itineraries will add many days at sea to reach the private island.

CELEBRATION, FL — Passengers on Disney Cruise Line’s many Caribbean itineraries have long enjoyed a visit to Castaway Cay, Disney’s private island in the Bahamas. But beginning in 2019, every Disney cruise, no matter where its primary destination, will included a day at the tropical paradise!

When Disney began operating cruise ships back in 1632 [Note: double-check this before publication], it was the very first cruise line to have its own private island. The Disney Company’s fleet of warships forcibly took the island from Spanish control (see Wikipedia, The Battle of Gorda Cay) in 1634. They then fought off pirates for the next several years to maintain control, leading to a unique island paradise, a theme park ride, and several movies.

At first, of course, Disney Cruise Line only had two ships, the Disney Magic and the Disney Wonder. And because they only had itineraries in the Caribbean, every cruise could include at day or two at Castaway Cay.

Recently, though, DCL added two new ships, the Disney Dream and the Disney Fantasy, and with the new ships came added ports and destinations. Several other new ships are being added to their fleet as well, including the Disney Nina, the Disney Pinta, the Disney Santa Maria, and the Symphony of the Seas. With many ships now cruising the Mediterranean Sea, crossing the Panama Canal, exploring the glaciers of Alaska, or circling the waters of Bay Lake, Castaway Cay was no longer within easy reach.

Disney reportedly disliked having so many cruises unable to visit Castaway Cay, so it was announced this week that Castaway Cay would be added to every itinerary. This will, obviously, require expanding most of the non-Caribbean itineraries to include the island. For example, one of the shorter cruises DCL offers is its “2-Night Baja Mexico” cruise, with this itinerary:

–
With Castaway Cay added, the same 2-day cruise now looks like this:

–
Pretty exciting for a two-day cruise, isn’t it?!

Do you think the fares will go up on the 2-day cruise? Let us know in the comments below!

October 4, 2018 by Marty in Other, World
© 2020 Uncle Walt's Insider. All rights reserved. All images used with permission. Unless otherwise attributed, all images licensed under Creative Commons CC0 license. This site is protected by reCAPTCHA and the Google Privacy Policy and Terms of Service apply.