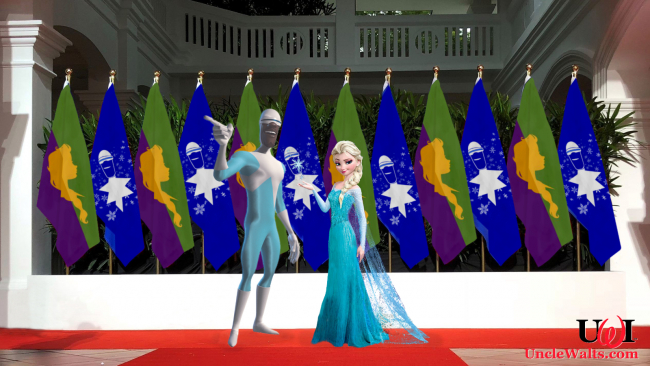 Each side blames the other for the continued cold snap.

LONGYEARBEN, NORWAY — The multi-day summit between Elsa, Queen of Arendelle, and Frozone, representing Metroville, ended early on Thursday without an accord. The two leaders met in facilities provided at the Svalbard headquarters of Uncle Walt’s Insider, which had agreed to host the summit as a neutral but cold location.

It had been hoped that an end to the inordinate winter cold would be negotiated, but apparently that will not happen. Talks fell apart when our reporter Ub kept telling bad “ice” puns in spite of warnings to stop. The parties also expressed concerns about security when they saw X’s head repeatedly passing the windows as he drove a Zamboni around the building.*

No further meetings are scheduled at this time.

*Walt and Marty were unavailable as they were attending the Churro Summit in Cancun, Mexico (uninvited).

Who would you blame? Let us know in the comments below!

Cover photo: Frozone and Queen Elsa pose for photographers at the Svalbard Summit.

March 1, 2019 by Marty in Other
© 2020 Uncle Walt's Insider. All rights reserved. All images used with permission. Unless otherwise attributed, all images licensed under Creative Commons CC0 license. This site is protected by reCAPTCHA and the Google Privacy Policy and Terms of Service apply.