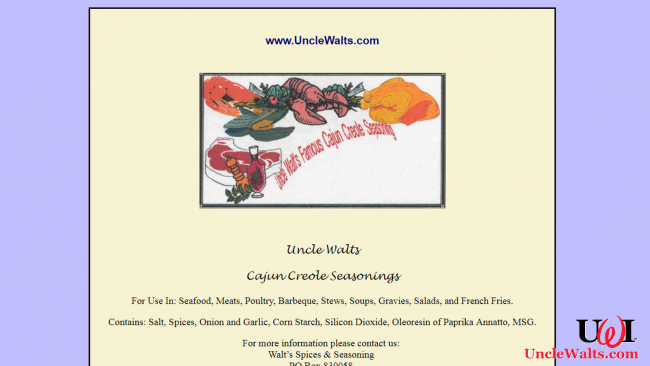 UNCLE WALT’S INSIDER H.Q. — Thank you for your interest, but no, we are not now selling Cajun or Creole seasoning blends, nor do we intend to in the future.

But every now and then we get folks asking when we are going to start selling our seasoning again. These comments baffled us almost as much as the male baby-having ones.

Wayback to the rescue

Fortunately, Ub recently stopped playing with his trains long enough to show us a link to the Internet Archive Wayback Machine, which archives billions of pages of websites from years past.

From the Wayback Machine, Ub learned that there was a previous owner to our current domain UncleWalts.com, whose site was active in the early 2000’s. You see, while Uncle Walt’s Insider has been operating since the 1920’s, we only transitioned from print to electronic online additions last year, once we were able to convince our Uncle Walt that this internet thing wasn’t just a flash in the pan.

So no, the “Uncle Walt” who sold “Cajun Creole Seasonings” is not our Uncle Walt. For one thing, our Uncle Walt knows that “Cajun” and “Creole,” while similar, are not the same thing, and to put them together in the name of one product would be like offering “Belgian French” cuisine or “Langostino Lobster” dishes. (Looking at you, Red Lobster, on that last one.)

For another thing, we’ve all tasted our Uncle Walt’s cooking, and we can confidently say that there is absolutely nothing marketable about it.

So no, this version of UncleWalts.com does not offer seasoning for sale. In fact, we do not even have an online store (yet). We probably need for a couple more articles to go viral and get our regular readership into at least double digits before we even consider it.

But even when we do add an online store, sorry, there still will be no seasoning offered for sale. It will likely just be merchandise with the Uncle Walt’s Insider logo on it, although Marty swears he was charged $200 by Neiman Marcus for a chocolate chip cookie recipe that he wants to sell cheap as revenge.

Are you a Cajun Creole? Let us know in the comments below!

July 28, 2018 by Marty in Other
© 2020 Uncle Walt's Insider. All rights reserved. All images used with permission. Unless otherwise attributed, all images licensed under Creative Commons CC0 license. This site is protected by reCAPTCHA and the Google Privacy Policy and Terms of Service apply.