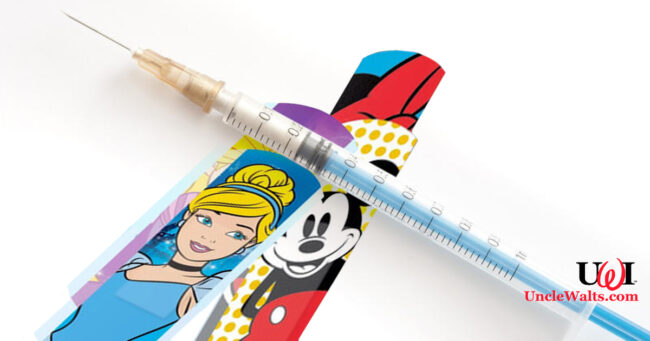 This isn’t just another Disney cash grab, is it? Nah.

Initially, the company will target markets in Washington State, Oregon, California, and New York; that is, states where the government is willing to be authoritarian combined with a majority of residents who seem to blindly follow whatever the government says.

We didn’t know Disney did pharmaceuticals, at least not for guests

While major pharmaceutical companies have been in the news for their own Covid-19 vaccines, Disney flew under the radar.

Disney (the company) spokeswoman Jun Disney (no relation) tells Uncle Walt’s Insider, “This has been in the works for years – ever since we opened up Hong Kong Disneyland, actually. We partnered with a lab in Wuhan to develop this vaccine.

“Unlike the other vaccines on the market, this one will require guests to receive three initial shots, and then a booster every six months. For life.”

“Your readers should now that severe illness will occur if you do not receive all three doses, or if you ever miss a booster. And it’s not compatible with other Covid-19 vaccines, so you will not be able to get one shot and then get a second shot of another vaccine.”

If this is the case, we wondered, why would anyone get the Disney (the vaccine) shot?

Disney (no relation) had a quick answer. “Easy!” she said. “Every shot comes with a discounted Disney character-branded adhesive bandage!”

I want to be first in line! What about you? Let us know in the comments below!

Cover photo: Any risk is totally worth the reduced-price Disney-branded adhesive bandage, right? Photo by freeimageslive.co.uk [CC BY 3.0].

August 27, 2021 by Walt in Other
© 2020 Uncle Walt's Insider. All rights reserved. All images used with permission. Unless otherwise attributed, all images licensed under Creative Commons CC0 license. This site is protected by reCAPTCHA and the Google Privacy Policy and Terms of Service apply.