Nightmare Before Christmas overlay coming to WDW!... on the Teacups? - Uncle Walt's Insider

Nightmare Before Christmas overlay coming to WDW!… on the Teacups? 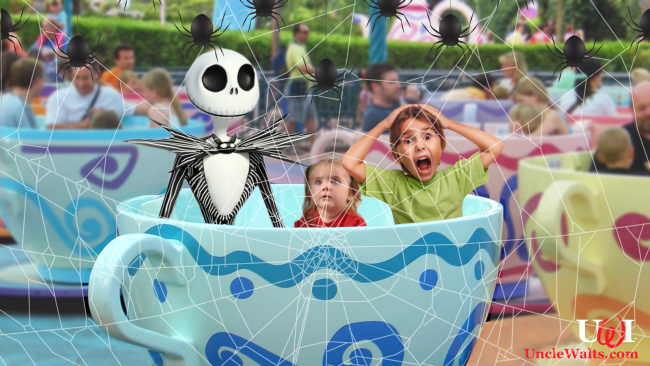 So, good news and bad news.

WALT DISNEY WORLD, FL — There is a favorite holiday ride modification at the original Disneyland Park in California — and now it’s coming to Florida!

For the past 37 years [Ed.: Eleven years before the movie debuted? Marty, quit making up numbers], Disneyland’s Haunted Mansion has been transformed with the popular Nightmare Before Christmas overlay. The change happens in the Fall and stays through January, so that the overlay covers two major holidays! (Thanksgiving and Boxing Day.)

Nightmare overlay at the Magic Kingdom!

Uncle Walt’s Insider has learned that the Nightmare Before Christmas overlay will be coming to Walt Disney World — but not to its Haunted Mansion. No, for some reason it will be the Teacups [Official attraction name: the “Teacups”] that will have Jack Skellington, Sally, Oogie Boogie, and Lurch.

We reached out to Disney (the company) spokesperson Jun Disney (no relation) for an explanation.

“This was George’s call,” Disney (no relation) said, referring to Walt Disney World President and Spa George A. Kalogridis. “He figured the overlay should go on the creepiest, scariest attraction we have. I overheard him saying adding Nightmare Before Christmas to the Teacups would be an improvement.

“Apparently he had nightmares about Tweedledum and Tweedledee when he was young and it’s haunted him ever since.”

Where should the overlay go? Kilimanjaro Safaris, right? Let us know in the comments below!

July 25, 2019 by Marty in Florida
© 2020 Uncle Walt's Insider. All rights reserved. All images used with permission. Unless otherwise attributed, all images licensed under Creative Commons CC0 license. This site is protected by reCAPTCHA and the Google Privacy Policy and Terms of Service apply.