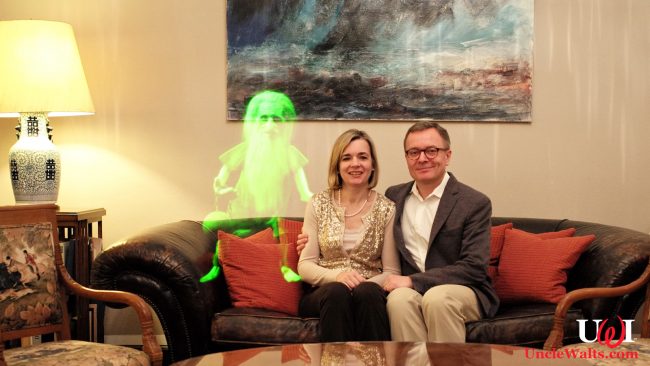 “We always thought that ‘a ghost will follow you home’ line was just a joke.”

ST. GEORGE, UT — The Haunted Mansion ride at Disneyland Park has been giving guests light-hearted scares since it opened in 1969. After entering the house through a mysterious stretching room, guests board “doom buggies” which take them through the mansion, meeting ghouls and ghosts along the way. But for one Utah family, the creepiness didn’t end when they exited the ride.

“There’s a part at the end of the ride where the ‘Ghost Host’ tells you that ‘a ghost will follow you home’ to haunt you until you die or something,” Abram Grant, 41, tells Uncle Walt’s Insider. “We’ve always that that line was, you know, just a joke.”

Not a joke this time

But it was no laughing matter when Grant, a lifelong resident of St. George, Utah, realized that the ghost was still with his family as they rode the moving sidewalk to exit the Haunted Mansion.

“I could see one of the ‘hitchhiking ghosts’ bobbing alongside us as we went up the ramp,” Grant shares, “and I thought — ooh, that’s a cool effect. But then we left the ride building completely and he was still there. Oh, he was hard to see in direct sunlight, but later he was with us, softly glowing, in our hotel room. And then he was in the car, and now he’s been at our house for the month since we got back from our Disney trip.”

Grant says they’ve gotten used to the ghost’s presence. “We call him ‘Steve.’ He never says anything, and mostly just sits on the couch binge-watching Game of Thrones. And we don’t even pay for HBO, so there is some upside to having him around.”

Would you like your own ghost? Let us know in the comments below!

May 30, 2018 by Marty in California
© 2020 Uncle Walt's Insider. All rights reserved. All images used with permission. Unless otherwise attributed, all images licensed under Creative Commons CC0 license. This site is protected by reCAPTCHA and the Google Privacy Policy and Terms of Service apply.