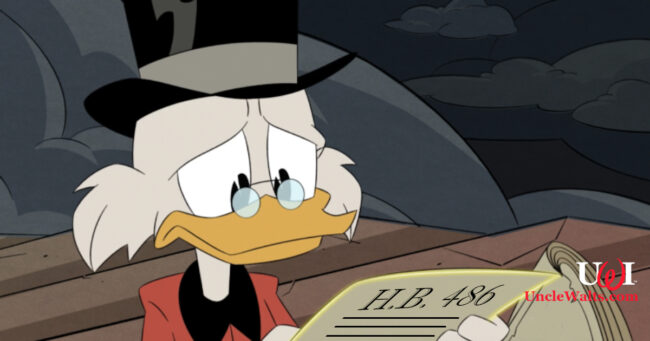 High-up Disney execs living in the RCID may find their sweet deal coming to an end.

ORANGE COUNTY & OSCEOLA COUNTY, FL – Fun fact: there’s a legal requirement in Florida for government entities like Disney’s Reedy Creek Improvement District to have residents who vote on district matters. And so even though the RCID exists solely for the benefit of the Walt Disney World Resort, a handful of Disney executives and their families actually live there.

So, the Disney suits who live on Disney’s massive Florida landmass fulfill that requirement that such districts – of which there are… okay, there is precisely one in Florida – have residents. These residents make up the district council and vote on the typical issues seen by every county or town.

To qualify to be a resident of the Vatican-like Reedy Creek Improvement District, one simply must be a highly-paid executive of the Walt Disney World Resort & Spa & Grooming Center and commute daily to the company headquarters in Burbank.

Tax breaks: not just for the company!

Florida Governor Ron DeSantis (R) and the Florida State Legislature recently rescinded the tax and self-governance advantages of the Reedy Creek Improvement District. This had the extraordinarily discriminatory move of, well, requiring the Disney theme parks to operate on the exact governance and taxation requirements as their competition.

But it isn’t just the Disney Company that has been benefitting from the lower tax rates. RCID residents also received these tax and self-government advantages – meaning those few Disney bigwigs also have been enjoying tax breaks other Florida residents (including tens of thousands of Disney Cast Members) don’t get.

Disney owns approximately 47 square miles, but they do not allow Cast Members to live on Disney property. As a result, they cannot take advantage of the same tax benefits. Instead, they must fend for themselves at the same level as other regular citizens of the Central Florida area.

Recently, this amazing UWI gumshoe (me) caught up with Disney (the company) executive and spokeswomn Jun Disney (no relation) who asked not to be named in this interview.

It’s off the record, so Jun didn’t tell us this

“It’s so sad,” Disney (no relation) didn’t say. “Those of us who live in the RCID can’t grasp that we’ll have to pay the same tax rate as the <shudder> little people who work for us!

“You know, we have the highest average per capita income of any region in Florida. I just don’t know how we’re gonna make it.”

Your amazing reporter (me again) asked for examples.

“Oh, and their taxes are going up too. Each one receives and now must pay taxes on their $666,000 stipends for being residents. How do the $50-an-hour Cast Members even live like this? (That is how much they make, right?)”

Reedy Creek resident and Disney (the company) CEO Bob “Bob” “Paycheck” Chapek (not related) told this incredible reporter that he feels the company has no reason to worry.

“You would think this might seem scary to us, but no worries. We’ll just raise prices like we always do.”

Still, other residents are concerned about their abilities to live as they have in other ways. Resident Bob “Bob” Iger told Uncle Walt’s Insider, “I’ve enjoyed having a nice shooting range out behind my double-wide. Will I continue to be able to do that? I just don’t know.”

Should Reedy Creek Improvement District residents continue to receive tax breaks? Is Ub a pretentious moron? Let us know in the comments below!

May 7, 2022 by Ub in Florida
© 2020 Uncle Walt's Insider. All rights reserved. All images used with permission. Unless otherwise attributed, all images licensed under Creative Commons CC0 license. This site is protected by reCAPTCHA and the Google Privacy Policy and Terms of Service apply.