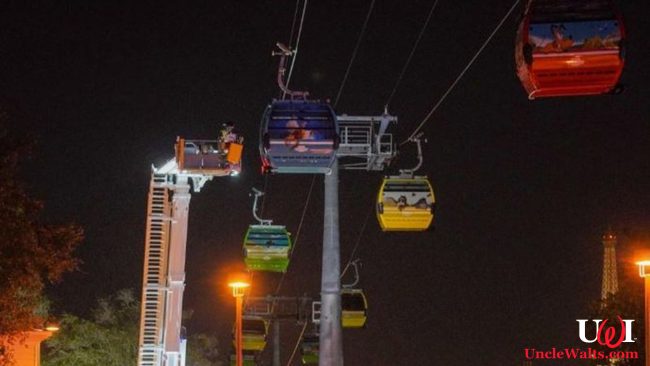 WALT DISNEY WORLD, FL — Normally, Disney publicizes new attractions well in advance of their unveiling. Disney fan sites also try to find out about new rides before any official announcement, and of course Uncle Walt’s Insider usually scoops them all. But this one took everyone by surprise!

On Saturday, the Walt Disney World Resort and Spa debuted a brand new thrill ride without any fanfare or announcement at all: SUSPENDED: a Skyliner Adventure®.

The new ride breaks new territory for the resort. Not only is SUSPENDED the first ride to debut without any Disney publicity, but it is also:

.
In unrelated news, Walt Disney World reports that when the Skyliner reopens, every car will be equipped with a Port-a-Potty.

Do you have your Fastpass for SUSPENDED? Let us know in the comments below!

October 7, 2019 by Marty in Florida
© 2020 Uncle Walt's Insider. All rights reserved. All images used with permission. Unless otherwise attributed, all images licensed under Creative Commons CC0 license. This site is protected by reCAPTCHA and the Google Privacy Policy and Terms of Service apply.