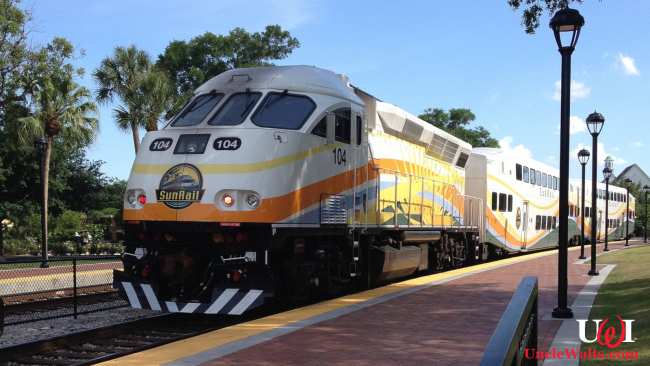 ORLANDO, FL — Officials for SunRail, a seldom-used commuter rail line in the Orlando area, are celebrating this week following the temporary closure of the Walt Disney World Railroad.

The Walt Disney World Railroad at the Magic Kingdom is an iconic attraction, but has been temporarily closed for several months. The closure is due to construction of a new Tron attraction in Tomorrowland, which will require some minor re-routing of the railroad tracks. The Railroad’s last day of operation was Sunday, December 2.

An eagle-eyed reader texted the Uncle Walt’s Tip Line with an intriguing story. “Was at Gaylord Palms Conv. ctr, saw sign ‘Sunrail Celebration – Ballroom 12’. Wondered what SR has to celebrate”.

Being the ace investigative reporters that we are, we decided to track down the details.

For those of you who aren’t familiar [Ed.: I think that’s everyone. I even had to look it up and I lived in Orlando for 10 years before moving to Svalbard last June], SunRail is a commuter rail service which runs with limited service (M-F, 8am-6pm, no late night or weekend hours) to 16 inconveniently located stations throughout the Orlando area. Since opening in 2014, the system has been plagued by low ridership and safety issues.

We caught up with SunRail spokesperson Sonny Rails (no relation), and asked what the celebration was about.

“Simply put, we’re excited that the Walt Disney World Railroad is closed. With that closure, and with the recent closure of the Wildlife Express Train at (Disney’s) Animal Kingdom, we finally moved into the Top 25 safest trains in the Orlando Area. It’s a huge, monumental occasion for us. We average approximately 2-4 passengers per day, and we’ve had over 30 accidents in 4 years. To be recognized as one of the (25) safest railways in Orlando is great news!

“So, our executives decided to spend more taxpayer money and throw a huge bash at the Gaylord Palms. It was awesome. Open bar, Publix cake, the works. We’re amazingly happy that we’re finally considered safe!”

Here is a complete list of all currently-operating Orlando railways, ranked in order of their safety:

.
What do you think? Would you ride SunRail now that it’s the 25th safest train in Orlando? Let us know in the comments below!

December 7, 2018 by X in Florida
© 2020 Uncle Walt's Insider. All rights reserved. All images used with permission. Unless otherwise attributed, all images licensed under Creative Commons CC0 license. This site is protected by reCAPTCHA and the Google Privacy Policy and Terms of Service apply.