Star Wars Weekends are back! 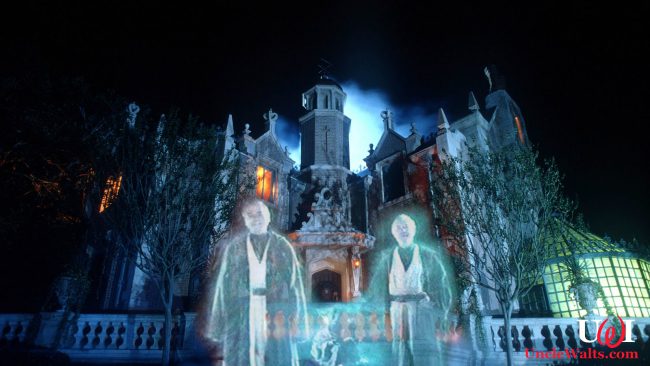 It’s true! Or not! Frankly, we’re a little confused.

That’s the rumor, at least, a rumor possibly even confirmed by Disney. Uncle Walt’s Insider can confirm that these rumors are true, at least at Disney’s Hollywood Studios! [Ed.: Still waiting for the headline to match the story…] It turns out that Star Wars Weekends are coming to Magic Kingdom! (Kind of.)

Your humble reporter was were looking for snacks recently in what appeared to be the nicest abandoned home that we’ve been in, located in California’s beautiful San Fernando Valley, and we came across a folder. This folder contained a letter detailing the move to the Magic Kingdom, and opening of the Star Wars Weekends Overlay of the Haunted Mansion!

The entire ride is being re-themed to Star Wars. While details were scarce in the letter, the only thing included was a photograph that showing that the ghosts of Obi-Wan Kenobi (old version), Yoda (old version) and Anakin Skywalker (again, old version. Not that crap hack job that Lucas put in…) will replace the hitchhiking ghosts! The “hurry back” ghost will be replaced with General Princess Leia Skywalker-Organa-Solo, with a line that will be sure to please even the die hard fans!

Look for the Star Wars Weekend Special Edition Haunted Mansion Overlay to open exclusively at the Magic Kingdom on May the 4th! [Ed.: Wait, that was yesterday. I really should prep articles faster.]

We’re skipping this one if Jar Jar Binks is in it! What about you? Let us know in the comments below!

May 5, 2020 by Walt in Florida
© 2020 Uncle Walt's Insider. All rights reserved. All images used with permission. Unless otherwise attributed, all images licensed under Creative Commons CC0 license. This site is protected by reCAPTCHA and the Google Privacy Policy and Terms of Service apply.