“Space 220” scam: Epcot restaurant is not actually in space 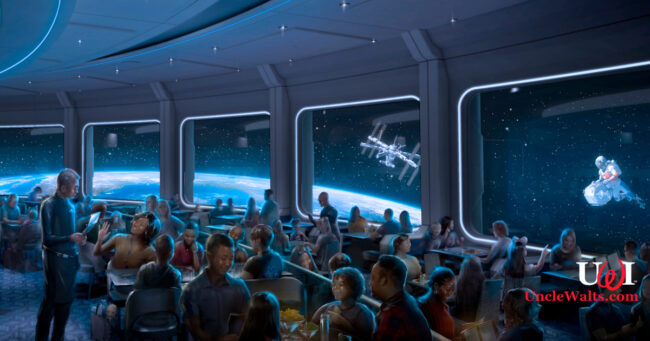 We were all set to review it until we learned it costs money.

WALT DISNEY WORLD, FL — My assignment was simple, handed to me by Uncle Walt himself. “Review this new ‘Space 220‘ restaurant at Epcot,” he said. “Our readers need to know everything about it — the experience, the food, the drinks, the atmosphere.” He chuckled at the last word, apparently intending a barely-pun based on “space” and “atmosphere.” Like with most of Uncle Walt’s jokes, I only got it a day or two later.

“Boss, we missed the media preview,” I replied. “And as always, Disney is not willing to pony up airfare, lodging, park admission, and food and beverage charges for a representative of a website based in Svalbard that routinely mocks them. They don’t even take my calls any more.”

“Oh,” replied Walt. “In that case, just see what you can figure out from your office computer. You did pay the internet bill this month, right?”

A restaurant built on lies?

Two days later, after the check cleared and our internet was restored, I set to work. As I expected, there are already videos on YouTube about the Space 220 experience. And the food. And the drinks. Even some on the atmosphere. But I discovered one little secret that could blow up into a scandal for Disney greater than the great inflatable Cinderella Castle revelation of 2017.

Space 220 is not actually in space!

Yes, that’s right. Check out this video, which closely matches the experience I imagine myself having if I worked for a place where they reimburse expenses. Starting at about 1:00, guests board a “space elevator” to take them straight up to the restaurant. But if you look carefully at the start of the video, the space elevator tower you’d expect to see rising up behind Mission: Space IS. NOT. THERE! Apparently, Disney is just simulating going to space!!

So what seems like a bargain — 79 bucks to go into space, and they throw in a meal! — is just for show. So disappointing, but I guess not a surprise for a company that charges people to look at their fireworks.

But the Living Seas hydrolators were real right? Right??? Let us know in the comments below!

October 5, 2021 by Marty in Florida
© 2020 Uncle Walt's Insider. All rights reserved. All images used with permission. Unless otherwise attributed, all images licensed under Creative Commons CC0 license. This site is protected by reCAPTCHA and the Google Privacy Policy and Terms of Service apply.