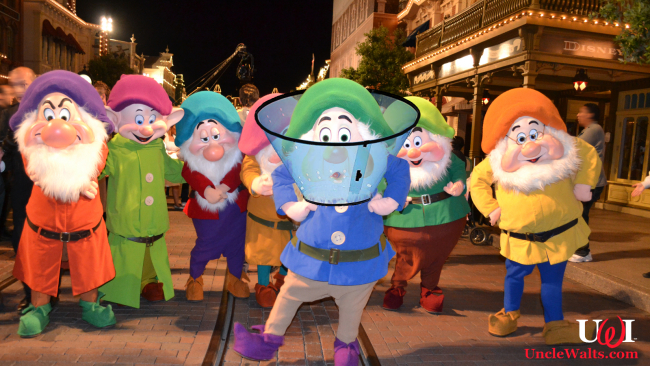 WALT DISNEY WORLD, FL — UPDATE: Following our character dining review/exposé of the new Storybook Dining at Artist Point yesterday, the Reedy Creek Health Department immediately suspended Sneezy from appearing in restaurants. And today it was announced that he may return, but only if he is wearing a “360° sneeze guard.”

The Health Department issued a statement apologizing for a lack of oversight and that the deluxe dining experience did not meet Disney standards. They further stated that future meals would be monitored to ensure they “do not contain more than the suggested maximum amount of mucus and other bodily fluids.”

Will you go back there if Sneezy’s cone of shame is in place? Let us know in the comments below!

February 2, 2019 by Marty in Florida
© 2020 Uncle Walt's Insider. All rights reserved. All images used with permission. Unless otherwise attributed, all images licensed under Creative Commons CC0 license. This site is protected by reCAPTCHA and the Google Privacy Policy and Terms of Service apply.