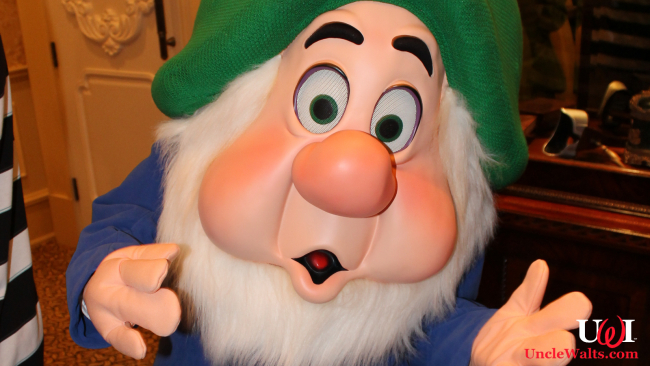 WALT DISNEY WORLD, FL — Many fans of Artist Point, the fine dining restaurant at Disney’s Wilderness Lodge, were upset when Disney announced it would be transformed into a character meal. Me? I was thrilled. The meal would feature visits from Snow White, the Evil Queen, and assorted Dwarfs. And where better to place characters for a German fairy tale but in a restaurant themed to a U.S. National Park lodge?

The menu features imaginative dishes themed to the well-known fairy tale. I eagerly ordered a Lost-in-the-Woods Lichen and Moss Salad, a cup of Singing Bluebird Soup, and the Mixed Grill of Forest Animals for my entree. And I was looking forward to adding on a Poisoned Apple Tart for dessert.

While my huntsman-dressed server was friendly (though the constant swinging of his axe over my head did make me nervous), I never got to taste my food. Just as it was delivered to my table, Sneezy stopped by, and true to form, sneezed all over the plates. Snow White was nearby and witnessed the whole thing, but she just clapped and sang and acted like I should be thrilled about it.

Between Sneezy’s constant, well, sneezing, and Dopey knocking over servers’ trays left and right, I’m not sure how many others got to taste their food that day. And given the Evil Queen’s roaming from table to table threatening to kill us all, maybe that’s for the better. I’m not sure I’ll be back.

Would you have eaten food covered in Sneezy’s mucus? Let us know in the comments below!

February 1, 2019 by Marty in Florida
© 2020 Uncle Walt's Insider. All rights reserved. All images used with permission. Unless otherwise attributed, all images licensed under Creative Commons CC0 license. This site is protected by reCAPTCHA and the Google Privacy Policy and Terms of Service apply.