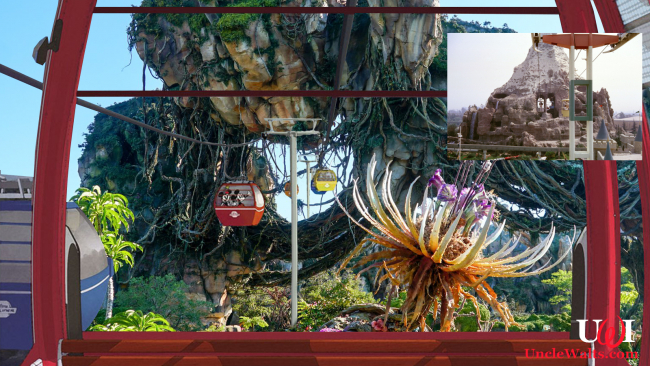 Everything old is new again.

WALT DISNEY WORLD, FL — Before the Walt Disney World Resort and Spa even opens its Skyliner gondola system, concept artwork has been leaked showing a future part of the system — and it’s a shocker. First, the new route will pass over Disney’s Animal Kingdom Theme Park and Spa. And there, in an apparent reference to the old Disneyland skyway passing through the Matterhorn, the new Skyliner line will pass under the floating rocks of Pandora: the World of Avatar.

We reached out to our favorite Disney (the company) spokesperson Jun Disney (no relation) for an explanation.

“It’s nostalgia,” Disney (no relation) shares. “Some Imagineers working on the system have great memories of seeing the skyliner cars pass through the Matterhorn attraction. They were just looking for the right place to pay tribute.”

But why Pandora, we wondered?

“It’s the only place that worked. To be practical, the attraction we passed through had to be on the way to somewhere we wanted the gondola to go. That ruled out the mountains of the Magic Kingdom, since there’s nothing much to the north of it.

“Expedition: Everest was the next thought, since we could pass the line through on the way to the All-Star Resorts. But there’s not a lot of space inside there. Not to mention the very real threat that the Yeti would knock the cars off of the cables. That left Pandora, since the line to the Animal Kingdom Lodge and Spa can be routed through it.”

The Pandora environment is a beautiful example of Disney’s fully immersive theming, we noted. Won’t the presence of gondolas with their towers and cables ruin that experience?

Disney (no relation) was dismissive. “Eh, theming’s overrated. They’ll probably just paint a Banshee on the bottom of each car or something.”

How would you ruin Pandora? Let us know in the comments below!

October 12, 2018 by Marty in Florida
© 2020 Uncle Walt's Insider. All rights reserved. All images used with permission. Unless otherwise attributed, all images licensed under Creative Commons CC0 license. This site is protected by reCAPTCHA and the Google Privacy Policy and Terms of Service apply.