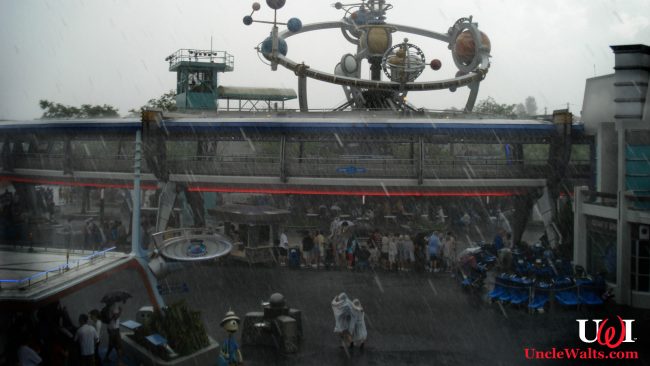 StupidGuestTricks.com brings you this remarkable tale of guest absurdity.

WALT DISNEY WORLD, FL — While at the Magic Kingdom during a rainstorm the other day, an Uncle Walt’s Insider staff member stopped by Guest Relations to compliment a hard-working (and likely underpaid) Cast Member. While we were there, we overheard a rather newsworthy complaint: the guest at the next window was complaining that the rain was more inconsistent than it should be!

The Rain, the Whole Rain, and Nothing but the Rain

The unknown guest (who, based on their accent, was from the Long Island area) was complaining quite vociferously about the weather. We were intrigued, and sneakily turned on the record feature on our cell phone. What follows is our best attempt at transcribing the ensuing conversation:

Angry Guest (AG): “When I was here ten years ago, the Cast Member said that the rain was very predictable.”

AG: “You should make sure it rains at the same time every day so that we can know when to avoid the parks.”

AG: “Why doesn’t it rain at exactly the same time every day? Fox News (inaudible) no such thing as (inaudible)!”

CM: (leaning in and speaking softly) “Okay, ma’am,… we’re not supposed to admit this, but we do actually control the weather here. Or at least normally we do, but unfortunately the invisible dome that covers Walt Disney World is currently down for maintenance. However, we do not (inaudible) Fox News [Ed.: yet], and we cannot control what they say. I’m not a scientist, but I can only assume that the fact that weather patterns have changed over the past ten years, and that we are having this conversation right now, does, in fact, point to some sort of global or localized climate change.”

By this point, we had finished with our conversation at the next Guest Relations window, and we didn’t witness the end of the conversation. Nevertheless, we thought that you, our dear readers, would appreciate this story.

Of course, our regular Uncle Walt’s readers (both of you) were already aware of the scheduled Walt Disney World dome maintenance. That’s just another reason to read Uncle Walt’s Insider daily (especially on Sundays!) to be prepared for inconsistent rain and other travel pitfalls.

This post has been brought to you thanks in part to a generous sponsorship from StupidGuestTricks.com. Try not to wind up as a story on their site.

Cover photo of an inconsistently rainy day at Tomorrowland by Simon Kellogg [CC BY 2.0] via Flickr.

June 27, 2018 by X in Florida
© 2020 Uncle Walt's Insider. All rights reserved. All images used with permission. Unless otherwise attributed, all images licensed under Creative Commons CC0 license. This site is protected by reCAPTCHA and the Google Privacy Policy and Terms of Service apply.