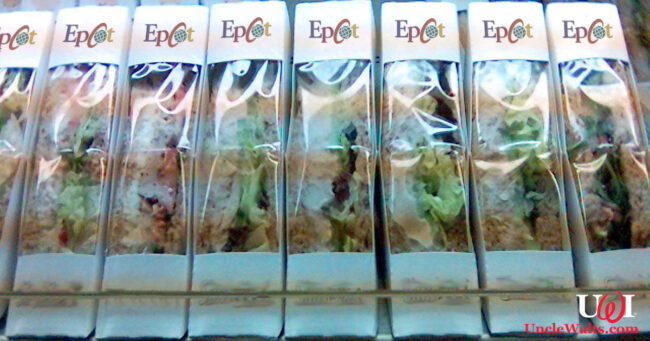 Also, instead of being sold in kiosks, they’ll be in vending machines.

EPCOT, FL — Walt Disney World is welcoming guests once again, and that can only mean one thing: it’s festival time at EPCOT!

This year the International Food & Wine Festival starts early and Uncle Walt’s Insider has obtained an exclusive look at the upcoming menus. And there’s a special treat this year: for guest safety, all items are pre-packaged!

Here’s a look at some of the more appetizing offerings from this year’s festival:

Lutefisk Smørbrød – Lutefisk from a jar spread on a slice of store-bought white bread.

Applebee‘s is open with its full menu. In fact, it never closed!

Pani ca Meusa – Guest choice of caciocavallo or ricotta and a slice of milza di mucca atop crostini, and lemon juice from a bottle.

No specialty foods, but a Cast Member from Canada will be on hand to apologize.

Are you excited for the EPCOT version of the Gas Station Sandwich? Let us know in the comments below!

July 21, 2020 by Walt in Florida
© 2020 Uncle Walt's Insider. All rights reserved. All images used with permission. Unless otherwise attributed, all images licensed under Creative Commons CC0 license. This site is protected by reCAPTCHA and the Google Privacy Policy and Terms of Service apply.