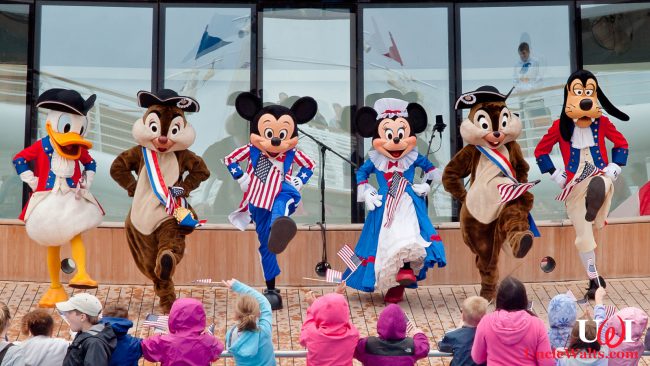 WALT DISNEY WORLD, FL — It’s upon us once again — that glorious day where we celebrate our nation’s independence from the oppressive monarchy of Great Britain. The day where people prove their patriotism by getting drunk and then playing with explosives.

But let’s say that you’re not at home, but on vacation. How do you celebrate freedom while at Walt Disney World? Grab your Eagles [Ed.: No, not those Eagles. Or those. Ok, maybe that one]! We’re going to teach you the best, and most patriotic ways to observe the holiday at the Most Magical (and Patriotic) Place on Earth!

We’re going to start out by talking about food. Why? Because we’re hungry! And because we’re American, and as a nation, we’re all obese! So, without further ado, our selection for the most patriotic non-junk food. Pizza! And not just any pizza, but pizza from a restaurant named for a rat. Head over to Disney’s Hollywood Studios, and grab a slice at Pizzerizzo.

Some people will try to say something like “Ice Cream” or “Apple Pie”. However, to us, there’s nothing more patriotic than a churro. The cinnamony sugary goodness hits the spot on a warm day. Or a cold day. Or a day where the temperature is actually rather pleasant.

Most Patriotic Place to Watch Fireworks

Mexico. That’s right. Mexico. Climb up to the top of the big patriotic pyramid in EPCOT Centre, and you’ll have a great view of the fireworks, not just at Epcot, but also at Hollywood Studios, and the Magic Kingdom. If you’re lucky, you’ll even manage to not see any part of Rivers of Light at Animal Kingdom.

We were going to say “Meet Luigi from Cars”, but then we remembered that there’s no Luigi meet and greet. So, instead, we recommend that you head over to Gaston’s Tavern, and meet Gaston. Because nothing says patriotism like a chauvinistic Frenchman.

Most Patriotic Thing To Do

Move all the way to the end of the row. Stopping in the middle is distinctly unpatriotic.

If you’re from another country, how do you celebrate America? Let us know in the comments below!

July 3, 2018 by X in Florida
© 2020 Uncle Walt's Insider. All rights reserved. All images used with permission. Unless otherwise attributed, all images licensed under Creative Commons CC0 license. This site is protected by reCAPTCHA and the Google Privacy Policy and Terms of Service apply.