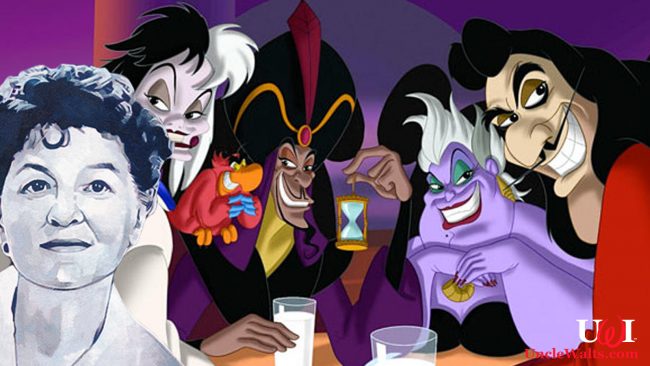 Perhaps the scariest villain ever in the Disney parks!

ANAHEIM, CA — At recently-concluded D23 Expo and Spa, Disney (the company) announced an all new attraction themed to the beloved movie Mary Poppins. In the attraction (to be built at Epcot since Brexit is dragging on so much), guests will join with Mary Poppins, Bert, Jane & Michael Banks, and Tiger Lily, as they try to prevent the Banks’ home from being destroyed. (Apparently Admiral Boom’s clock malfunctions, and Mr. Binnacle constantly fires off the cannon.)

Buried in this announcement was the latest addition to the family of Disney Villains: Mary Poppins author P.L. Travers.

Disney (the company) spokesperson Jun Disney (no relation) is excited about what she calls “the P.L. Travers experience.”

“Guests will love interacting with Mrs. Travers! She scolds them on proper use of the English language, shares her disdain for the original Mary Poppins film, and generally tries to convince guests to leave the made-up fantasy of the Disney Parks and go find a real park with real people.

Oh, and whatever happens, do NOT call her Pamela, or P.L., or Misses. Always call her Mrs. Travers. Trust me.”

Intimidated by P.L. Travers? Let us know in the comments below!

September 9, 2019 by Walt in Florida
© 2020 Uncle Walt's Insider. All rights reserved. All images used with permission. Unless otherwise attributed, all images licensed under Creative Commons CC0 license. This site is protected by reCAPTCHA and the Google Privacy Policy and Terms of Service apply.