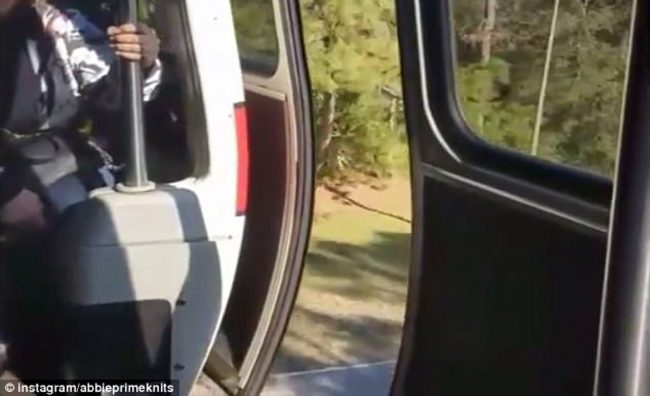 A video recently posted to YouTube appears to show a dangerous situation aboard Monorail Red. Taken from the inside of a passenger car as the monorail train travels to Epcot, the video shows one of the doors to be open. Was this a malfunction, or has Disney implemented an open door policy? Uncle Walt’s Insider sent a crack team of investigators to dig further into this situation, and our findings will shock you.

The current Mark VI monorail has been in service since 1989. While some minor changes have been made, such as moving to automated operation, there have been no significant design changes. Disney works hard to maintain the fleet, but these hardworking trains are starting to show their age. There have been numerous breakdowns over the years, some of which required guests to be evacuated and the trains towed to the shop.

This latest incident has guests concerned and wondering if it is safe to ride the “highway in the sky.” A few guests provided quotes to Uncle Walt’s Insider:

“If all monorails had op’nings like that, I could spit out the winder instead of into my coke bottle. My wife says people think that’s gross.” – Ricky Day, 38, Bowling Green, KY

“All I ask is a tall ship and a star to sail her by. And until a proper fix is put into place, my family and I will enjoy a trip on a ferry or perhaps a motor-coach.” – Cheryl Paddington, 43, Yorkshire, UK 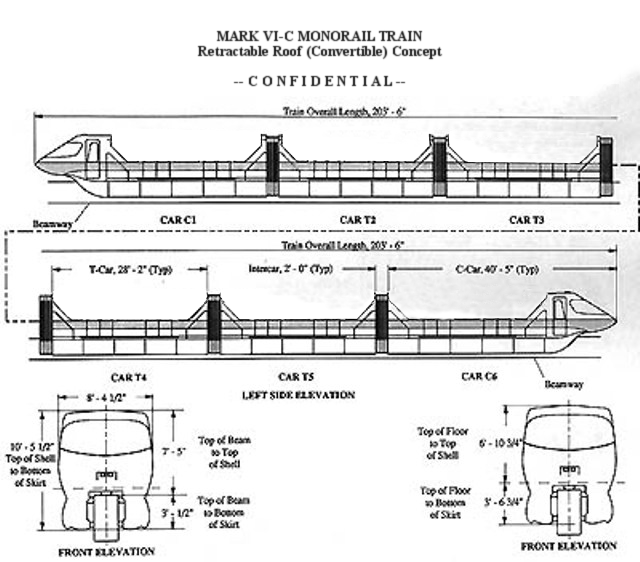 In the course of our investigation, Uncle Walt’s discovered that Disney has been considering some major changes to the monorail fleet. On a recent trip to Orlando, Uncle Walt himself came across a set of drawings marked “confidential” in the American Airlines Admirals Club at Orlando International Airport.

Apparently left by a forgetful Imagineer, the drawings show a new Walt Disney World “Mark VI-C” convertible monorail concept. The drawing shows a drop top monorail, a design that will have guests reaching for their sunglasses and riding like celebrities.

With the new design, a Monorail Pilot can with the flip of a switch let guests enjoy the fresh, clean air of central Florida. Notes on the drawing suggest that this new design will allow further ventilation, as well as connecting guests with nature. However, there was no mention of open or missing doors on the new monorail design.

This new monorail concept does bring other requirements into play. For example, all guests must be seated and wearing seat belts while the train is in motion. Children will need to be removed from strollers, hats and glasses secured in the seat pocket in front of you; no eating, drinking, or smoking, and no flash pictures, please.

Love is an open door?

Uncle Walt’s Insider spoke with Disney Imagineer Orville Yeager about the new designs and the open door. Mr. Yeager shared this with us, “We’re always coming up with design ideas, most of which never make it past the concept stage. I can’t say if we’re building new monorails or not, just that we’re always looking forward. But maybe, just maybe, we were seeing how guests reacted to the new ‘open air’ monorail concept.”

We pressed Mr. Yeager about this recent door incident on Monorail Red. Was it indeed intentional because of the new convertible design? Or perhaps part of the recently announced drone delivery? Or a coming wild west style train robbery? Maybe allowing sky-diving or bungee jumping from a monorail?

Yeager said he could not directly respond to those questions, but added that he does share the concerns of the guests. “Of course we are concerned — the oxygen masks failed to fall from the ceiling after the cabin depressurized. Rest assured that we’re looking into that so it does not happen again!”

Would you ride a convertible monorail? Let us know in the comments below!

January 12, 2018 by Walt in Florida
© 2020 Uncle Walt's Insider. All rights reserved. All images used with permission. Unless otherwise attributed, all images licensed under Creative Commons CC0 license. This site is protected by reCAPTCHA and the Google Privacy Policy and Terms of Service apply.