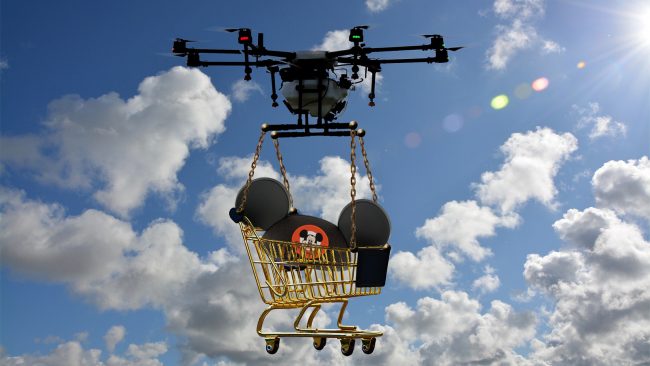 It’s a New Year, and now new technology is coming to the Walt Disney World Resort!

More gifts were bought online than in stores this Christmas, and internet retailer Amazon again led the pack. The Disney Company has taken note of this growing trend and is partnering with Amazon to offer a new retail experience for its guests. The companies announced today that, after a test run, Amazon will soon offer same-day delivery of online Disney Park purchases, fulfilled by their fleet of drones, directly to Disney guests waiting in queues for Walt Disney World attractions.

Disney no stranger to drones

Disney has often used drone technology to not only gather information on guests, but to also entertain them! The widely successful Starbright Holidays at Disney Springs in 2016 was just a test for advanced drone usage at Walt Disney World parks and resorts. For example, parts of the ride films for both Soarin’ Around the World and Avatar: Flight of Passage were also filmed using drone technology. Disney concluded that they could safely and efficiently fly dozens of drones in a confined area, taking drone usage at Walt Disney World to the next level. And that is exactly what they plan to do.

The future has arrived

According to a press release, Disney and Amazon’s joint service will feature same day, in-park delivery of items purchased via the Shop Parks app. The purchases will be flown overhead from an Amazon warehouse by a drone, into the parks, and the drone will deposit the items at the feet of the guest as they wait in line.

Disney spokesperson Jun Disney (no relation), reached out to Uncle Walt’s Insider to share this exciting news. Ms. Disney (no relation) shared this with us, “Have you ever passed up an item at one the shops, and then decided you did want it? However, you were at the opposite end of the park and in the middle of an amazing 240 minute wait? I know I have, and we’ve found a solution to the problem! Drones!”

After some back and forth small talk about queues and wait times, Ms. Disney (no relation) continued, “Select items will be available to be delivered direct to you, in-queue, via Amazon drones! Using our magic band technology, we can locate you and safely deliver the item! Imagine the excitement when you hear the whirr of the drones as they get closer! It’ll be like Christmas, in July!”

Consumer level drones can safely carry around 40 pounds of weight, but does Disney plan to go beyond that? “Right now, no.” Ms. Disney (no relation) said. She continued, “The current plan is to only use this to deliver smaller, light-weight items. Such as socks, t-shirts, smaller plush toys, and churros. That’s right! Using the My Disney Experience app, you’ll be able to place an order for some favorite snack items, and have them delivered right to you in queue!”

But will it be safe?

With all of these drones soon flying around the parks and over guests heads, will it be safe? We reached out to newly hired Disney drone pilot, Lt. Skip “Jammer” Steelman, to find out. Jammer, as he preferred to be called, re-assured us that this is completely safe. “Drones get a bad rap from the press. I’ve only crashed seven drones, but the seventh one was not my fault. It was during a nighttime check-out flight in a heavy thunderstorm. I told them that it wasn’t safe to fly, but they insisted as part of the training. I was loaded up with a stuffed Dumbo and sent on my mission. Lightning struck, I lost controls, and well, let’s just say that Dumbo didn’t have his magic feather that night.” Wiping a tear, he continued, “Since then we’ve modified protocol, and no longer fly in severe weather.

Any other restrictions, we asked? “We’re also limited if the number of Mickey balloons around the guest is too high,” according to Jammer. “We learned about that the hard way.”

The new service is likely to begin next month.

Will you use this new drone service? Let us know in the comments below!

January 1, 2018 by Walt in Florida
© 2020 Uncle Walt's Insider. All rights reserved. All images used with permission. Unless otherwise attributed, all images licensed under Creative Commons CC0 license. This site is protected by reCAPTCHA and the Google Privacy Policy and Terms of Service apply.